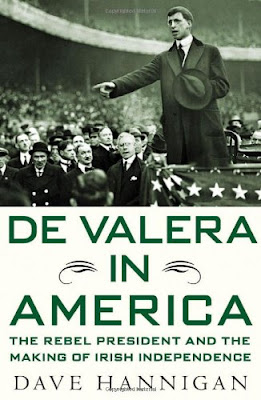 A new book by Irish journalist and commentator Dave Hannigan, De Valera in America: The Rebel President and the Making of Irish Independence, illuminates an interesting period in New York Irish history when de Valera, born in New York City in 1882, made an important return trip to convince Americans to recognize the newly proclaimed Irish Republic.

Eamon de Valera is one of the most famous characters in Irish history. He commanded troops during the 1916 Easter Rising, co-authored the Irish constitution, and in 1926 founded Fianna Fail, which continues to be the largest political party in Ireland today. De Valera was head of the Irish government from 1932–48, 1951–54 and 1957–59 and President of Ireland from 1959–73.

In June 1919, he arrived at the Waldorf-Astoria Hotel pronouncing himself the &#8220President of Ireland.&#8221 He was on a mission to convince the United States to recognize Ireland as an independent nation, and also to fund the independence movement, which would be a clear affront to Britain. De Valera went on to give speeches in some of America’s largest venues, including Madison Square Garden and Fenway Park, where he drew crowds of 60,000 people. Over the course of that year, he accumulated fame and scandal, but more importantly, he gained essential financial support for the fledgling Irish Republic.

For the first time, a book follows de Valera on his controversial trip across America, exploring his personal and political relationships, and the costs and benefits of his perilous crusade. From newspaper headlines to cloak and dagger antics, Hannigan delivers a truly unique slice of Irish Americana, bringing to life this pivotal moment in history.

Dave Hannigan is a columnist at The Sunday Tribune in Dublin, the Evening Echo (Cork) and The Irish Echo. A former Irish young journalist of the year, he is also an adjunct professor of history at Suffolk County Community College on Long Island. He lives in Rocky Point, New York.