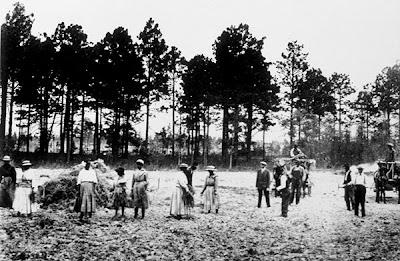 The “Dreaming of Timbuctoo” Exhibition will be on view at the Whallonsburg Grange Hall in the Champlain Valley from July 3-9. The Grange is located on Route 22, five miles south of the village of Essex, NY.

When it premiered at the Adirondack Museum in Blue Mountain Lake in 2001, “Dreaming of Timbuctoo” revealed the little-known antebellum history involving black homesteaders granted land in the Adirondacks in the mid-1840s—a step toward winning the vote for free black New Yorkers.

Through this abolitionist “scheme of justice and benevolence”, 3,000 African American men from nearly every county in the state each received 40 acres of land. John and Mary Brown moved to the Adirondacks in 1848 to be a friend and neighbor to those who settled their land. One of the loosely knit communities came to be called “Timbuctoo”.

As the nation marks the 150th anniversary of the start of the Civil War, the Whallonsburg Grange Hall and John Brown Lives! host the exhibition and several educational and cultural events that examine the political war on slavery, discuss its place in North Country history, and its relationship to civil rights issues.

Other upcoming programs at the Grange include:

Wednesday, July 7 at 7:00 p.m.: The Struggle for the Right to Vote, Past and Present, with historians and civil rights activists Dr. Laura Free, criminologist Alice Green, and Paul Murray, Mississippi volunteer in the 1960s. Excerpts from the new film marking the 50th anniversary of the Freedom Riders will be shown. Admission $5- students free.

Saturday, July 9 at 8:00 p.m. Magpie in Concert, featuring the gorgeous harmonies, brilliant musicianship, and inspiring songs of the folk duo, Greg Artzner and Terry Leonino. Admission $7- children under 12 admitted for $3.

Related programs at Heaven Hill Farm will involved a trek into the archaeological dig underway at one of the “Timbuctoo” homesteads under the direction of Dr. Hadley Kruczek-Aaron, SUNY-Potsdam Professor of Anthropology and Director of the Timbuctoo Archaeology Project. The dig is near the John Brown Farm State Historic Site in North Elba. Reservations for both Heaven Hill events are necessary and can be made at mswan@capital.net or 518-962-4758.

Thursday, July 7, from 8:00 a.m.-2:00 p.m., educators, artists, parents and community members engage in a roundtable conversation to shape a Timbuctoo Adirondacks-Timbuktu Sahara friendship connection. A representative from a Tuoareg community school on outskirts of the Malian city of Tiimbuktu will be present.

Sunday, July 10, from 3:00-6:00 p.m., a visit to the dig site of the Timbuctoo Archaeology Project and reception afterward. $20 per person would be appreciated.

“Dreaming of Timbuctoo” is a joint project of John Brown Lives! and the Essex County Historical Society. Funding from the New York Council for the Humanities and the New York Council on the Arts were principal funders of the exhibition. The Arts Council of the Northern Adirondacks is providing support for the concert with Magpie.

For more information, go to www.thegrangehall.org or contact Martha Swan, Director of John Brown Lives! at mswan@capital.net or 518-962-4758, or Mary-Nell Bockman at Whallonsburg Grange Hall, Marynell@mac.com or 518-570-2382.