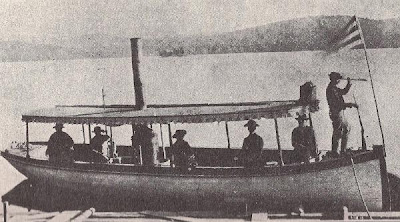 The Town of Webb Historical Association and Goodsell Museum, located at 2993 State Route 28 in Old Forge, Herkimer County, is currently featuring the exhibit “Floating Letters-The Town of Webb’s Mail Boats-Over 100 Years of Postal Tradition and Summer Fun” through the end of October.

The exhibit presents the history of the delivery of mail by boat in the Town of Webb on the Fulton Chain of Lakes, Big Moose Lake, Twitchell Lake, Rondaxe Lake, Silver Lake, and other locations from the early 1880s until the present. The exhibit includes photographs, certificates, ledgers and maps -as well as a wide assortment of custom leather & canvas/cloth mail pouches donated or on loan for the exhibit.

Included in the exhibit is the story of the Railway Postal Office (RPO) &#8211 a unique contract issued to Dr. William Seward Webb & the Fulton Chain Navigation Co. in 1901 whereby an official postal clerk rode on the boats to cancel mail, sell stamps & money orders, and perform other postal duties.

Additional exhibits at the Goodsell Museum include those on Adirondack wildlife, the Goodsell Family (George Goodsell was the first ‘mayor’ of the Village of Old Forge in 1903) and the 90th Anniversary of the Thendara Golf Club. The next featured exhibition, on early medicine, will open December 1st. The Webb Historical Association maintains a regular exhibit on early local doctors which will help form the basis the of the new exhibit.

The Goodsell Museum is open year-round- there is no admission charge.

The museum is also participating in Old Forge’s “First Friday Art Walk” events by including special exhibits connecting art with historical themes. On July 1st from 5-8PM they will have one of Lottie Tuttle’s oil paintings on display. Lottie was one of the Adirondack’s first female guides, she and her husband invented the devil bug fishing lure that was manufactured in Old Forge and marketed across the United States in the early 1900’s.

On July 9th the Association will hold its 9th Annual Benefit Auction. Preview and registration starts at 1 pm, bidding at 2 pm with auctioneer June DeLair from Constableville Auction Hall. The auction is held under a tent on the Goodsell Museum grounds and will include antiques, collectibles, new and nearly new items donated from members and friends of the museum.

The Association also has other programs, workshops, and walking tours. More information can be found online or by contacting Gail Murray, Director, via e-mail at [email protected] or by phone at

Photo: The Steamboat Hunter &#8211 Captain Jonathan Meeker delivered mail to hotels and camps as early as 1883.

One thought on “Exhibit Features 100 Years of Adirondack Mail Boats”