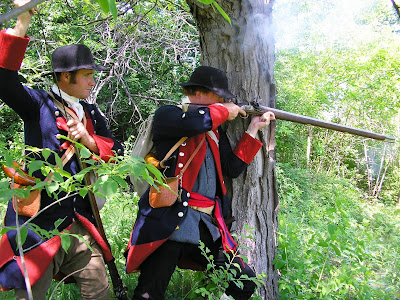 Re-enactors portraying French and British soldiers of the Seven Year’s War, also known as the French and Indian War, will converge upon Fort Ticonderoga this Saturday and Sunday, June 25 and 26 to recreate the tumultuous and chaotic events by which General Amherst’s British army captured the vital Fort. Visitors will experience the life of British soldiers and besieged French soldiers recreated around them, with all the sights and sounds they would have encountered at Fort Ticonderoga in the summer of 1759.

The modern recreation of this clash for empire will feature a variety of demonstrations and events. Highlights of the weekend include: a battle each day featuring re-enactors recreating events of the siege as reported in the diary of a private in Willard’s Regiment of Massachusetts Provincials, who was part of the British force attacking the Fort- artillery and musket demonstrations- a talk by author Russ Bellico on his book, Empires in the Mountains– 18th-century music performed on period instruments by musician Robert Mouland- a rousing game of 18th-century cricket- and historic merchants to give visitors an immersive experience in the inevitable victory for the British forces. In addition to these special events, visitors to Fort Ticonderoga on June 25 and 26 can also enjoy the museum’s extensive collection of artifacts and militaria and the King’s Garden- admission to this reenactment weekend is included in the price of general admission to the Fort.

During the Seven Year’s War the great rivalry between France and Britain played out in their American colonies. The summer of 1759 saw General Amherst, commander and chief of all British forces in North America, moving to take the French Fort Carillon (Ticonderoga) from the rear guard of soldiers posted there. Amherst moved his massive force of 11,000 to siege lines previously held by the French outside the Fort. The tiny French contingent of 400 pounded the British line with artillery for four days, in a futile attempt to stave off the inevitable. Finally, with their defeat in sight, the French spiked the cannons in the Fort, rendering them useless, and lit a fuse in the powder magazine, which exploded with destructive force. The French force retreated by boat to Fort St. Frederic in the north, also known as Crown Point. Out of the rubble of the old Fort Carillon rose the new Fort Ticonderoga as the British forces immediately moved in to begin reconstructing the fortifications.