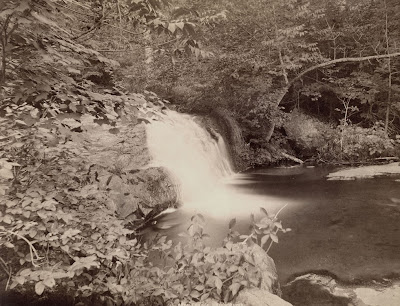 A new exhibit featuring twenty original Seneca Ray Stoddard photographs of waterfalls in the Adirondacks is now on view at the Chapman Historical Museum. Included are popular falls located on the Hudson, Raquette and Ausable Rivers, as well as lesser known falls in remote locations in the central Adirondacks — places that today still are accessible only by foot. Examples are Roaring Brook Falls on Giant, Buttermilk Falls on the Raquette, Surprise Falls on Gill Brook near Lower Ausable, and Silver Cascade in Elizabethtown. The photos will be on display until July 3rd.

In 1864, when Seneca Ray Stoddard relocated to Glens Falls from Troy, NY, he first worked as a sign painter, but soon took up landscape photography. Several times Stoddard made treks through the Adirondacks to photograph the sights that drew tourists to the region. Abundant waterways and the steep terrain made for many scenic cascades and falls, which became popular destinations for travelers. For the next 50 years he sold his images of these falls to tourists visiting the region.