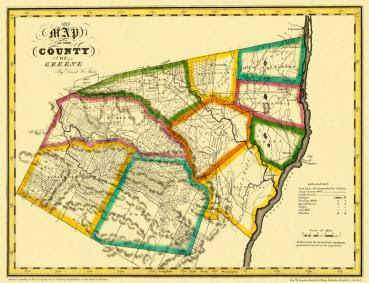 The Institute of History, Archaeology, and Education (IHARE) has announced the third of five county history conferences in the Hudson Valley to be held this spring, this one focused on Greene County. The first conference was held at the Mahopac Library in Putnam to a capacity crowd on March 19. The second one at the Albert Wisner Public Library in Warwick, Orange County on April 16 is fully registered.

Each Saturday conference brings together scholars, municipal historians, historic organizations, teachers, and lovers of history to share in the experience of the history of a region in the Hudson Valley, address the challenges in preserving that legacy, and to hear
about teaching local history in our schools.

Immerse yourself in the history of Greene County. Hear its music. View its art. Sing its songs. Tell its stories. See its historic sites. Learn about the Greene people who over the centuries have made the county what it is today. Meet the people who are preserving that
legacy and help us to continue to do so in the 21st century.

Greene County has experienced many changes since the end of the Ice Age and first human settlements in the land. Thousands of years later these first settlers would be joined by the Dutch, Palatines Africans, and the English. The area was part of the struggle for Independence
and witnessed a boom with the arrival of the turnpike, steamboats and railroads, and emergence of industry in the valley towns. The county became a cultural center as well with the stories of Rip Van Winkle, the paintings of the Hudson River Artists and the growth of tourism in
the mountain towns. By remembering our past we help to build the future our county in the 21st century.

Ted Hilscher is Associate Professor of History and Government at Columbia Greene Community College in his academic life. As one devoted to local history, he is the Town of New Baltimore Historian and Trustee Emeritus of the Greene County Historical Society. In the
past he was the chairman of the board of the Greene County Historical Society when that organization purchased the Thomas Cole House and the preservation efforts began in 1998. He also serves as a docent there.

Everyone knows that the Civil War occurred in the South &#8211 that’s where all the National Park Services sites are located excepted for Gettysburg! But it was the people from the North who fought in those battles and marched in those campaigns and no state contributed more than New York State. New York in particular contributed more soldiers to the Union than did any other state. The soldiers who fought the war shared their experiences with the homefront through letters to their families. These letters provide a graphic description of war and insights that only a soldier could have. The letters of Greene County resident William H. Spencer were transcribed by Eileen Cords, a descendant, during the town’s Bicentennial. Re-reading them reminds one of just how powerful they were and of their impact on the loved ones who were reading them.

Robert Uzzillia is a lifetime resident of Greene County. He graduated from SUNY Geneseo in 1980 with a BS in Geography and was appointed Cairo Town Historian in 1988. He has written articles for the Town of Cairo Bicentennial (Catskill Daily Mail), as well as a photo history
and has given presentations on topics ranging from a general history of Cairo to collecting salt-glazed pottery from Athens, NY.

The War Between the States was prolific in war poems and songs. In the North and South, poets and songwriters vied with each other in invoking the muse. The program will recreate the music of the period that reached the hearts of the people with fiery metrical appeals to
patriotism. The influence of music and the power of song &#8212– the plaintive ballad, the lofty, patriotic, and heroic lyric, the parody, the spiritual anthem and even the crude and comical camp fire songs will be presented. These are the songs that would have been heard in
&#8216-the hundred circling camps’ and family parlor by our ancestors.

John Quinn is the co-chair of the Greene County Civil War Sesquicentennial Committee, member of the Civil War Heritage Foundation, former teacher, school administrator and college faculty
member, board of trustee member at the Pratt Museum and Vice Chairman of the Community of Windham Foundation. He’s a member of the 77th NY Regimental Balladeers a Civil War parlor band.

Bill Lonecke &#8211 is a Social Studies teacher at Margaretville CSD. He is a member of the Civil War Heritage Foundation, Greene County Civil War Sesquicentennial Committee, Banjo player for the balladeers band and has over 30 years experience as a reenactor and historian.

An anecdotal account of history’s role in film, especially in the arts and entertainment which give an audience a touchstone to the past that political history rarely offers.

Jonathan Donald or his company has produced over 200 documentary and dramatic programs for network, cable, and Public Television including major series like the dramatized documentaries of Rediscovering America (Discovery), Faces of Japan (PBS), The Africans (Time-Life
Television and PBS), Conserving America (PBS), Wild, Wild World of Animals (Time-Life Television). He has written directed and produced these programs and won various awards such as an Emmy and Golden Eagles. He began his career in television at an ABC documentary unit.
His first jobs in broadcasting were at a radio station in Berkeley before moving to Public Affairs Director at WBAI in New York.

A Most Important Historical Legacy &#8211 Writing It Down!:
Getting the local words out
Deborah Allen, Publisher, Black Dome Press

Greene County’s only regional publisher shares the rem
arkable triumphs of documenting local history. Find out how books are really made, how they get into the stores and finally, onto your night stand. How can these books on local history be used in the classroom? Can local
students in high school and college partner with municipal historians and historical societies to write books about the history of Greene County and their community? Let’s talk.

Debbie Allen is the publisher of Black Dome Press, an independent publisher of New York State histories and guidebooks with a special focus on the Adirondacks, Catskills, Capital District and Hudson River Valley. Founded in 1990, Black Dome Press honors include the
first-ever Barnes & Noble 2009 &#8220Focus on New York Award for Outstanding Regional Literature,&#8221 the Columbia County Historical Society &#8220Preservation Heritage Award,&#8221 the Community of Windham
Foundation &#8220Leadership in Cultural Heritage Award&#8221 and the &#8220Distinguished Service Award&#8221 by the Greene County Council on the Arts. Their offices are in the Catskill High Peaks below Black Dome Mountain.

Hear what goes into selecting, collecting and organizing a collection and why organizations must constantly re-examine and re-define their roles.

Barbara Mattson lives in Maplecrest, NY and has been Executive Director of the Mountain Top Historical Society since 2008. She has written grants for non-profits and municipalities and has worked in the communications and media industries.

The River and the County
Hudson Talbott, author River of Dreams: The Story of the Hudson River

Hudson Talbott has written and illustrated nearly twenty books for young readers. Born in Louisville, KY, he attended Tyler school of Art in Rome, lived in Amsterdam, Hong Kong and traveled extensively throughout the world before starting his career in New York. His first
children?s book was commissioned by the Museum of Modern Art, called How to Show Grown-ups the Museum. His second book, We’re Back! A Dinosaur’s Story, was made into a feature-length animated film by Steven Spielberg. Hudson then collaborated with composer Stephen Sondheim on a book version of the composer’s musical &#8220INTO THE WOODS&#8221. His books have won a variety of awards and been transformed into other media. He was honored recently by Scenic Hudson Environmental Organization for his River of Dreams &#8211 The Story of the Hudson River. That book and O’Sullivan Stew have both been produced as musicals for young people. He is currently working on a book titled It’s All about Meow! A Young Cats’s Guide to the Good Life, which will soon be published by PenguinPutnam.

Wanda Dorpfeld was born and raised in Freedom, New York. She holds Bachelor of Science and Master of the Science of Education degrees from The College of St. Rose, Albany, New York. After living in Indiana and Washington, D.C., she moved to Greene County in 1977. She
was a teacher for 25 years in the Catskill Central School District. She currently is on the Board of the Greene County Historical Society and is co-chair of the Museum Committee and Chair of Board Development and Resources. She also is on the Board of The Heermance Public
Library and is Chair of Policy and Planning, Hudson-Athens Lighthouse.

Each year the second grade classes from Coxsackie Elementary School and Edward J. Arthur Elementary School participate in a special program called &#8220Beacons of Learning.&#8221 Through this program the students have the opportunity to visit and learn about the Hudson-Athens Lighthouse.

The boys and girls learn about the past, present, and future of this special community treasure. They meet Emily Brunner who lived on the lighthouse as a child and they discover ways to help with the preservation of the lighthouse. Another important feature is the
opportunity to experience the river firsthand. Despite living so near it, many of our students have never been on the Hudson River in a boat. We are thrilled to have the opportunity to share our program and experiences with the participants of the Greene County History Conference. We hope that by listening to the children recount their experiences, it will encourage more schools to learn about their local history.

The Institute of History, Archaeology, and Education, Inc. is a nonprofit organization dedicated to expanding the knowledge and appreciation of human cultures from ancient times to the present through an array of student, teacher, and public programs and activities. The goals and objectives of the organization are:

1. To increase the public awareness of the benefits of history and archaeology through public programs.

2. To promote the inclusion and development of history and archaeology in the k-12 curriculum.

3. To provide history and archaeology enrichment programs at the k-12 level.

4. To develop, implement, and teach history and archaeology programs for teachers by working with the schools and teacher centers.