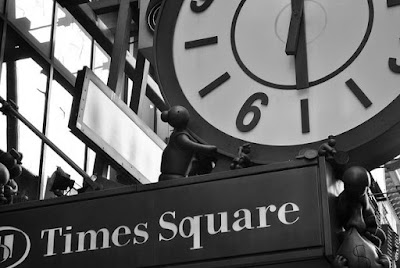 To add to the public’s appreciation of New York’s cityscape, and to encourage photographers to share their visions of America’s greatest city, the New-York Historical Society initiated its Times Square photography contest: an open competition in which anyone could submit views of the architecture, people, billboards and bustle of the gaudiest and most celebrated district in Manhattan.

All photographs submitted by the contestants may become part of the New-York Historical Society’s permanent collection. The photographs of the 29 semi-finalists, including the top three prize-winners, will also be featured on Flickr.

The winning photographs will be displayed in Times Square, in partnership with the Times Square Alliance and in continuation of both organizations’ public art initiatives.

First prize went to Fallon Chan for “Watching over Broadway,” which shows the back of the statue of George M. Cohan that stands facing Broadway. Taken with a telephoto lens, the photograph pulls in the Broadway sign nearly a block away, along with the crowd of pedestrians, while evoking the history of the Theater District through the figure of Cohan: the playwright, composer, lyricist, actor, singer, dancer and producer once known as “the man who owned Broadway.”

Second prize went to Michael Schmidt for “These Lights Will Inspire You,” the quintessential signage photograph. The foreground captures the speed and excitement of the taxis in the streets, while the background of marquees for Broadway shows leaves no doubt about where the photograph was taken.

Third prize went to Juan Beltran for “The Recruiter,” a mysterious image evoking a moment at the long-standing Times Square Recruitment Center. The composition draws in the viewer with its interplay of direct vision, shadow and mirrored reflections of Times Square street activity.