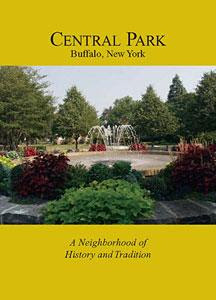 Proud Buffalonians and Erie County local history and architecture buffs will find a new book, Central Park, Buffalo, New York: A Neighborhood of History and Tradition, a unique glimpse at one of the first planned neighborhoods in Western New York.

The 214-page, full color, photo-based thoroughly documented coffee-table book takes readers on a tour of the Central Park’s graceful homes, historic churches and tree-lined streets. The book is available at the Buffalo & Erie County Historical Society’s Museum Shop. The price is $39.95, and all proceeds go directly to the Museum.

Central Park was planned and developed by Lewis J. Bennett, a successful entrepreneur who moved to Buffalo from the Hudson Valley. Bennett planned and named the streets, as well as many other amenities which enticed people to build homes in Central Park. As the book reveals the neighborhood’s history and streets, the reader is introduced to past residents, including business pioneers Bob Rich, John J. Boland, Adam E. Cornelius and Edward Barcolo- literary critic Leslie Fiedler- painter Robert Blair, and his brother, Charles Blair, a dashing war hero and aviator who married Hollywood legend Maureen O’Hara.

The book project was originally inspired by Rev. Samuel McCune, an amateur historian, who looked out of his Morris Avenue home and wondered who the street was named after. Rev. McCune embarked on several years of research, compiling information and historic pictures which are used in the volume.

It features photography by the late Dr. Peter Hare and other local photographers. James R. Arnone, a local attorney, wrote the text and took many of the photographs as well. The book also features recollections by the late Bob Venneman (1912-1998) of his experience living his entire life in Central Park, and especially during the relative early days of its development.