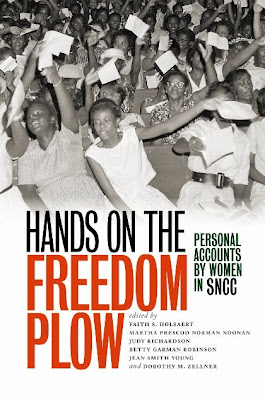 Five of the six editors of Hands on the Freedom Plow: Personal Accounts by Women in SNCC (University of Illinois Press), will join moderator Debra L. Schultz for a conversation about their own activist experiences and their ground-breaking efforts to preserve the personal stories of 52 women who fought for civil rights with the Student Nonviolent Coordinating Committee in the 1960s.

The panel discussion, presented by the Brooklyn Museum’s Elizabeth A. Sackler Center for Feminist Art, will take place on Sunday, November 14, from 2 to 4 p.m., in the Museum’s Glass Pavilion. This is the first New York City book party celebrating Hands on the Freedom Plow. A book signing, provided by MOBILE LIBRIS, follows. The event is open to the public and is free with Museum admission.

These accounts by women of various ages, races, and creed, document the many ways that women carried the southern civil rights movement and demonstrate how their stories have changed our historical understanding of one of the country’s most important democratic movements.

The Editors, who have all worked for SNCC include:

Faith S. Holsaert, a teacher and fiction writer from Durham, North Carolina, who has remained active in lesbian and women’s, antiwar, and justice struggles.

Martha Prescod Norman Noonan, a community organizer, activist, homemaker, and teacher of history including the civil rights movement, who lives near Baltimore.

Judy Richardson, a filmmaker and Movement lecturer from Cambridge, Massachusetts, whose projects include the PBS documentary series Eyes on the Prize and other historical documentaries.

Betty Garman Robinson, a community organizer who lives in Baltimore and is active in the reemerging grassroots social justice movement.

Dorothy M. Zellner, a New York City consultant who wrote and edited for the Center for Constitutional Rights and CUNY Law School.

Moderator, Debra L. Schultz, a feminist historian and author, is Director of Programs for the Open Society Institute (Soros Foundations) Network Women’s Program, which works to include women in the development of emerging democracies.