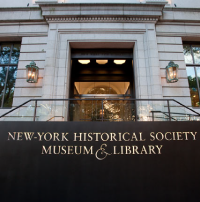 The New-York Historical Society has announced the launch of a new online portal to nearly 12,000 pages of source materials documenting the history of slavery in the United States, the Atlantic slave trade and the abolitionist movement. Made readily accessible to the general public for the first time at www.nyhistory.org/slaverycollections, these documents from the eighteenth and nineteenth centuries represent fourteen of the most important collections in the library’s Manuscript Department.

The collections include account books and ship manifests documenting the financial aspects of the slave trade- legal papers such as birth certificates and deeds of manumission- and political works and polemics. The materials range from writings by the abolitionists Granville Sharp, Lysander Spooner and Charles Sumner to the diary of a plantation manager and overseer of slaves in Cuba, Joseph Goodwin, and that of a former slave in Fishkill, New York, James F. Brown.

The site also provides access to the archives of abolitionist organizations such as the New-York Manumission Society and the Massachusetts Anti-Slavery Society, as well as the records of the African Free School, which document the education of free blacks in early nineteenth-century New York.

“The creative use of digital technology is a key priority in making the Society a highly accessible world-class resource for all,” stated Jean Ashton, Executive Vice President of the Historical Society and Director of the Library. “This project is a landmark achievement in our efforts to offer scholars, educators and students anywhere in the world immediate access to materials from the Society’s museum and library collections.”

The project was completed with the support of a $190,000 appropriation secured by Senator Charles E. Schumer’s office to digitize the Historical Society’s library collections. “As more and more of our world goes online, we must make sure that our historical records keep up,” said Senator Schumer. “By digitizing thousands of pages of materials documenting the history of slavery in the United States, the New-York Historical Society will make this collection accessible to any American interested in our history.”

Over the past six years, the New-York Historical Society has showcased documents, art and artifacts relating to the abolitionist movement and the network known as the Underground Railroad by publishing the papers of the African Free School in print and on the web, and through the following exhibitions:

Grant and Lee in War and Peace

Established in 1804, the New-York Historical Society (N-YHS) comprises New York’s oldest museum and a nationally renowned research library. N-YHS collects, preserves and interprets American history and art- its mission is to make these collections accessible to the broadest public and increase understanding of American history through exhibitions, public programs and research that reveal the dynamism of history and its impact on the world today. N-YHS holdings cover four centuries of American history and comprise one of the world’s greatest collections of historical artifacts, American art and other materials documenting the history of the United States as seen through the prism of New York City and State.