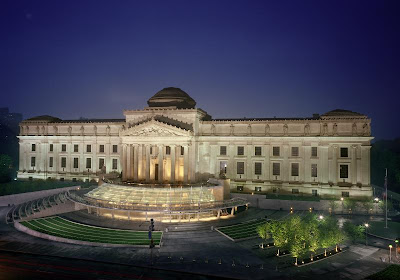 Beginning Wednesday, October 6, the Brooklyn Museum will open to the public eight additional hours a week, including remaining open until 10 p.m. every Thursday and Friday. When the new schedule goes into effect, the Brooklyn Museum will have a greater number of evening hours than almost any other New York City museum. Despite the challenging economic climate, the enhanced public hours will be implemented following an exhaustive year-long analysis of how the Museum’s public hours might be reorganized to more effectively meet the current needs of its audience.

Chairman of the Museum Board of Trustees Norman M. Feinberg states, &#8220The Board believes that the previous hours did not appropriately address the changing needs of its community. We are delighted, through this reorganization, to far better serve our visitors.&#8221

In announcing the expanded hours, Brooklyn Museum Director Arnold L. Lehman comments, &#8220This important and positive change is an institutional priority that will enable us to better serve a twenty-first century audience by providing greater access for visitors who work during the day, for families, as well as for those who prefer to visit weekday evenings.&#8221

Under the new plan, the Brooklyn Museum will open each day at 11 a.m. On Wednesdays, it will remain open until 6 p.m. and on Thursdays and Fridays until 10 p.m. Weekend hours, from 11 a.m. until 6 p.m., remain the same. The Museum will continue to present Target First Saturdays, its popular free evening of art and entertainment, when it remains open until 11 p.m. the first Saturday of each month except September. School groups will continue to be admitted at 10 a.m. on weekdays for guided visits by reservation.

Admission during the new hours, with the exception of Target First Saturdays, will remain at a suggested admission price of $10 and $6 for older adults and students with valid I. D. Members and children under 12 continue to receive free admission.

Existing staff hours, particularly those of the security team, have been rescheduled. The Museum Cafe, which is managed by Restaurant Associates, will offer dinner options as well as light snacks and beverages, including wine and beer, in the Rubin Pavilion.