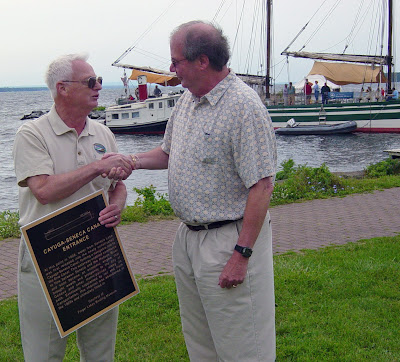 The Finger Lakes Boating Museum commemorated the important role of the Cayuga-Seneca Canal in the development of Geneva by donating an historical marker for the city’s waterfront. City and boating museum officials dedicated the marker in a ceremony at 11 a.m. Saturday on the lakefront near the Geneva Area Chamber of Commerce building. Bill Oben, President of the Boating Museum, made the presentation to Mayor Stu Einstein.

The dedication ceremony coincided with the stopover in Geneva of the Lois McClure, an 88-foot canal schooner moored for three days on the lakefront just west of the Chamber. The McClure is a full-scale working replica of an 1862 canal schooner, a unique example of working vessels that carried goods throughout Northeastern waterways during the 19th century.

“The scheduled arrival of the schooner Lois McClure in Geneva harbor this week is a wonderful reminder of the significant role the Cayuga-Seneca Canal played in the development of Geneva and the region beyond throughout the 19th century,” said Oben. “The last vestiges of the canal along the Geneva waterfront disappeared long ago as the old waterway was filled in to make way for the arterial highway. As we plan the future home of the Finger Lakes Boating Museum on the site of the original entrance to this historic canal, it’s appropriate to recognize this with placement of an enduring marker identifying the former location of this important transportation artery.”

Oben said the historical marker at the original canal entrance will be similar to others already along the waterfront that note significant people and places in Geneva’s history. Geneva Granite donated the granite base for the plaque.

The plaque on the marker will read as follows: “At this point in 1828, water from Seneca Lake was first released into the newly constructed Cayuga-Seneca Canal, forming a navigable link to the Erie Canal. This waterway enabled commerce to flow between Seneca and the Hudson River and soon became an economic engine that brought wealth and prosperity to the City of Geneva and other municipalities along its path. Eventually supplanted by rail and truck transportation, this channel was abandoned in the 1920s and ultimately filled in.”

The boating museum reached agreement with the City of Geneva last fall to establish a permanent home on the Geneva waterfront in association with the Visitor Center. The facility, which will be located on the current Chamber site, is being enabled by a $3.5 million grant provided to the city by State Sen. Michael Nozzolio.

The boating museum has assembled a collection of 100 wooden boats built in the Finger Lakes over the past 100 years, as well as numerous related artifacts and extensive reference material. The collection is being moved to a storage facility in the Geneva Enterprise Development Center on North Genesee Street arranged by the Geneva Industrial Development Authority.

Portions of the collection will be displayed on a rotating basis within the new facility. Also planned are interactive workshops and displays to engage visitors in the design, construction and use of the boats and an active on-water program including sailing and small boat handling.

Additional information about the boating museum may be found on its website.

The canal schooner Lois McClure, whose homeport is Lake Champlain, is making a 1,000-mile journey across New York’s canals as it stops in 20 ports of call. The tour will culminate in September with a trip to the World Canals Conference in Rochester. The schooner also stopped in Geneva in 2007 on a similar tour.

The expedition is made possible by a partnership between the New York State Canal Corporation, the Erie Canalway National Heritage Corridor, the Lake Champlain Maritime Museum, and the Champlain Valley National Heritage Partnership. This voyage is an opportunity for the public to learn more about the region’s interconnected waterways and the many activities found along the New York State Canal System and Erie Canalway National Heritage Corridor, highlighting the Canal System’s roles in transportation, recreation and tourism. Tours of the boat with interpretive presentations, wayside exhibits and educational materials will be provided free of charge to the public at each stop.

The schooner is a full-scale replica of an 1862 sailing canal boat. Constructed in Burlington, Vt., and launched in 2004, the Lois McClure is an exact replica of canal schooners found shipwrecked in the waters of Lake Champlain. The unique sailing-canal boats were the tractor-trailers of the 19th century, designed to sail from lake cities to canal ports using wind power. Upon reaching a canal, the masts were lowered and centerboards raised, transforming the vessel into a typical canal boat.

The schooner is named for Lois McClure, who was born in 1926 and grew up in Burlington, Vt. In 1954, McClure married James Warren McClure, an owner and publisher of the Burlington Free Press, and later a major stockholder and Vice President of the Gannett Company, Inc. In 1971, the McClures left Burlington for Rochester, where Lois McClure continued her education. In 1978, after J. Warren McClure retired, they moved to Key Largo, Fla., spending summers in Charlotte, until they returned to Vermont in 2002.

In the 1970s, the McClures began to make significant financial contributions to organizations in the Burlington area and elsewhere. After her husband became ill in the 1990s, Lois McClure took on the leadership role in their philanthropy, a role she has continued since her husband’s death in 2004. The schooner was named in McClure’s honor for her major contribution to the schooner construction and support of many other community projects.

Photo: Bill Oben (left), president of the Finger Lakes Boating Museum, presents Geneva Mayor Stu Einstein with a copy of the historical marker that the boating museum donated to the city to mark the entrance to the Cayuga-Seneca Canal. In the background is the Lois McClure, a replica of a canal boat that stopped in Geneva on a tour of New York State canal waterways.