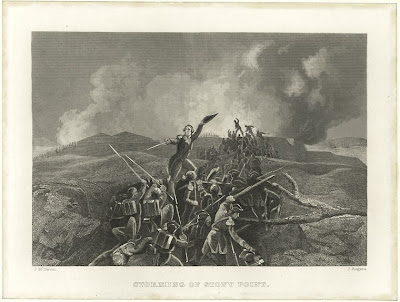 On the seemingly calm night of July 15, 1779, an unusual chill drifted through the summer air at Stony Point. The British garrison stationed there was confident in their position on the Hudson River and unaware of American plans to invade. Just before midnight, the stillness of the fort was broken as Brigadier General Anthony Wayne and his Light Infantry took the British by storm with a surprise attack. By 1 A.M., the garrison had surrendered, marking an important triumph for America and the last major battle in the north.

The Battlefield will come alive with demonstrations of 18th century warfare and performances of tactical demonstrations and mock skirmishes. Musket and artillery drills are planned throughout the weekend, showing visitors how weaponry was used in combat. Learn about the kinds of currency circulating through the colonies from our camp paymaster and witness a demonstration of the mail system by our colonial postmaster. Reserve a place on the Battlefield Lantern Tour Saturday evening and witness a recreation of the midnight assault while you take a guided walking tour through the battleground.

A range of activities are planned which will provide fun for the whole family. Children will love enlisting in Washington’s army at the camp recruitment table (where they will receive a certificate signed with a quill pen) and anyone can collect a reward for discovering the renegade hiding in the camp. Enjoy a Tea Party with staff dressed in colonial costume and learn about 18th century fashions and etiquette. Talk to our working blacksmiths to discover how tools were repaired or created to meet the needs of the army.

On Saturday and Sunday afternoons, Tom Hanford will present a family show of 18th century entertainment with music, stories and dramas from life &#8220In the Good Old Colony Days.&#8221