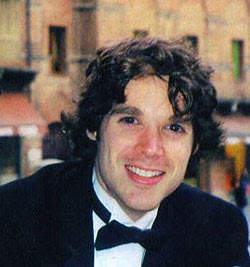 The Franklin County Historical & Museum Society presents &#8220America’s Song: A History of American Musical Theater in Word and Music,&#8221 a collaboration between Drew Benware and members of the Ithaca College School of Music, on Tuesday, July 13, 2010 at 7 pm. Admission is $10.00 per person, to benefit the Franklin County Historical Society. The program of toe-tapping favorites will be held in the Bobcat Cafe in the Joan Weill Student Center at Paul Smith’s College.

Drew Benware is a native of the North Country, having grown up in Malone, New York. Upon graduation from Franklin Academy, he enrolled at the Ithaca College School of Music where he received a degree in Music Education with a concentration on Trumpet in 2003. For the next three years, Drew served as the Director of Instrumental Music at Saranac Lake High School where he worked with the Concert Band, Jazz Ensemble, Pep Band, Parade Band, and annual Musical Theater Productions. Drew returned to Ithaca College to pursue a Master of Music degree in Choral Conducting, working with the renowned Larry Doebler and Janet Galvan. Among the high points of this period was a performance of Verdi’s &#8220Requiem&#8221 at Alice Tully Hall in Lincoln Center in New York City. Drew’s choral degree was put to use during the 2008-9 academic year during which he served as Director of Choral Activities at the Peru Middle/High School. Since that
time, he has been on the faculty at the Ithaca College School of Music as an Assistant Professor of Music Education, instructing courses in woodwind and brass techniques, instrumental conducting, wind instrument pedagogy, and acting as supervisor to both Junior and Senior level teachers. Drew also works closely with the nationally acclaimed Ithaca College Department of Theatre Arts, serving as faculty accompanist for the Musical Theater Workshop and performing in Pit Ensembles. Drew continues to serve as an active pianist, performing as music minister at All Saints’ Church in Lansing and as a frequent artist-collaborator including the 2009 Saranac Lake First Night Celebration. He
is active as a singer also, performing with the Saranac Lake Madrigal Singers and the Cayuga Vocal Ensemble, Ithaca’s only professional choir. He has provided musical direction or pit performances for several works of Musical Theater, among them &#8220Children of Eden,&#8221 &#8220Parade,&#8221 &#8220A Little Night Music,&#8221 &#8220Once On This Island,&#8221 &#8220The Music Man,&#8221 and &#8220Les Miserables.&#8221

The program will also feature performers from the Ithaca College School of Music and Department of Theatre Arts.

&#8220America’s Song&#8221 is co-sponsored by The Franklin County Historical & Museum Society and Paul Smith’s College. The Franklin County Historical & Museum Society, founded in 1903, preserves the history of Franklin County, NY through its House of History Museum and Schryer Center for Historical & Genealogical Reseach, located in Malone. It is supported by membership dues and donations, grants, and municipal support. Paul Smith’s College, the College of the Adirondacks is the only four-year private college in the Adirondack Park and is commited to experiential, hands-on learning.