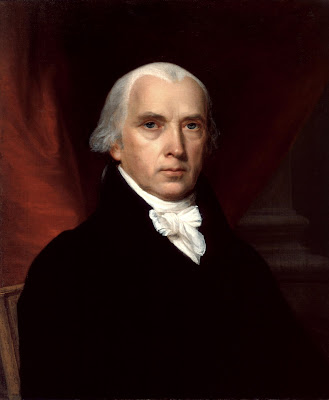 The unearthing of law notes made by a young James Madison sheds new light on the shaping of the mind of the man. Rediscovered by Mary Sarah Bilder, Professor of Law at Boston College, the 39 sewn-together pages of notes on common law cases were found among the papers of Thomas Jefferson at the Library of Congress.

Long thought to be Jefferson’s notes, Bilder’s painstaking study of the handwriting, style of language, summarising technique, paper watermarks and numbering system has led her to conclude that the notes were in fact Madison’s. Madison served as the 4th United States President- his Vice President was New YOrk State’s first Governor, George Clinton.

Bilder’s account of the discovery, and what it reveals about Madison, is published in the latest edition of the legal history journal Law and History Review, published on behalf of the American Society for Legal History by Cambridge University Press. Bilder contends that the law notes demand a reassessment of Madison who, unlike other important early national leaders such as John Adams, Thomas Jefferson and John Marshall, had been thought to have had little interest in law beyond some desultory early studies.

The notes cover a wide range of topics including criminal law, the make-up of courts, elections, how to accurately measure time and even sex and relationships.

The error of assuming the notes were made by Jefferson is not surprising, writes Bilder, as the two men’s handwriting was very similar: “Late in life, Madison successfully ‘faked’ Jefferson’s handwriting in altering a letter&#8230-.and the two men exchanged numerous letters.”

Provenance is also supportive of Madison’s authorship of the notes, which came to the Library of Congress in 1931 from Mary M. McGuire of New York City, grandchild of James C. McGuire, the administrator of the Dolley Payne Madison estate and the largest collector of Madison manuscripts.

In revealing something of the ‘mind of Madison’ Bilder admits that there is disappointment for any reader, “looking for a protoconstitutional mind”. But she does find a foreshadowing of the Fifth Amendment in Madison’s notes on a case of an indictment for treason: “you shall not ask a witness or a juror any question yt wd make a man discover what tends to his shame, crime, infamy or misdemeanor.” He also made notes on cases relating to Habeas Corpus, legislatures and elections.

Many of the notes relate to Madison’s contemporary concerns during his work in the Virginia legislature, including the possible make-up of court systems. He avoided anything that was not relevant to post-revolutionary America such as uniquely English forms of property law.

The private Madison also emerges from the notes as he appears to seek enlightenment on matters in his personal situation. As an eldest son, he would become his father’s executor and the two lengthiest notes involve the settling of estates. Given his dependence on the Virginia legislature for a living, he was, not surprisingly, interested in cases about salaries for various offices.

That the Notes have survived at all Bilder describes as ‘serendipitous’, for, at the end of his life, Madison destroyed many of his papers. She argues that the restoration of the notes to the authorship of Madison reveals the inaccuracy of the long-held view that he had little interest in law: “These notes have been missing for over a century, and their loss contributed to the sense that Madison must not have been that interested in law. Now located, these notes reveal Madison’s significant grasp of law.

Madison also made a surprising number of notes on cases relating to sex and relationships. Perhaps recalling erstwhile love, Kitty Floyd, who broke off their engagement, he made notes on breaches of promise to marry. He also made notes on cases involving cohabitation and seemed particularly interested in bastards. Bilder concludes wryly: “What motivated his fascination with the subject has to remain purely speculative.”

David B. Mattern, Research Professor and Senior Associate Editor of the Papers of James Madison at the University of Virginia, refers to the research as &#8220a remarkable feat of detective work&#8221.

The entire article is available free of charge at http://journals.cambridge.org/bilder.

Portrait of James Madison from the White House Collection.