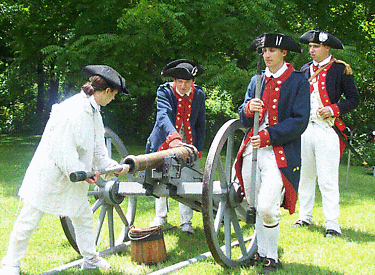 The New Windsor Cantonment and Knox’s Headquarters will present a weekend filled with Revolutionary War activities July 3rd and 4th, 2010. Throughout the celebration, authentically dressed soldiers and civilians will share stories of life from that exciting time. In addition, at the New Windsor Cantonment, there will be cannon and musket firings each day at 2:00 P.M. as well as blacksmithing and children’s activities. At Knox’s Headquarters, visitors may tour the beautiful 1754 Ellison House and watch as a small cannon is fired at 1:30 P.M. and 3:30 P.M. each day.

On the 4th, at 3:00 P.M., New Windsor Cantonment invites the audience to help read the Declaration of Independence, the revolutionary document that inspired the holiday. Following the reading, the 7th Massachusetts Regiment will fire a &#8220feu-de-joie,&#8221 a ceremonial firing of muskets in honor of independence.

Knox’s Headquarters, the Ellison House, honors the site’s namesake General Henry Knox, Washington’s Chief of Artillery, with the firing of a 4 1/2 &#8221 bronze coehorn mortar at 1:30 P.M. and 3:30 P.M on Saturday July 3 and Sunday July 4. This mortar, designed to be carried by two men, fired a grenade size exploding ball. John and Catherine Ellison were gracious hosts to three Continental Army generals at different times during the Revolutionary War.

New Windsor Cantonment is located with the National Purple Heart Hall of Honor on Route 300 (374 Temple Hill Road) in the Town of New Windsor, four miles east of Stewart Airport. It is three miles from the intersection of I-87 and I-84 in Newburgh, New York. Knox’s Headquarters is located, a mile away from the New Windsor Cantonment, at the intersection of Route 94 and Forge Hill Road in Vails Gate.