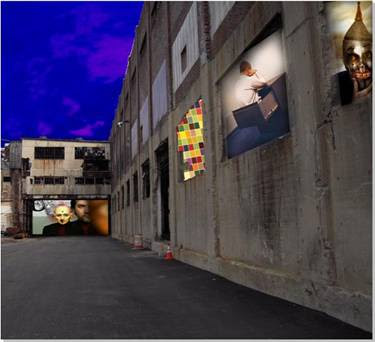 Staten Island’s once abandoned waterfront will be hosting LUMEN, a cutting-edge video art festival on the site of the Atlantic Salt Company, presented by COAHSI, the Council on the Arts & Humanities for Staten Island. This raw, magnificent, old, beautiful, decaying space, originally opened in 1876 as a plaster mill. In 1924, the building was bought by United States Gypsum, a plant that made wallboard and paint. The gypsum plant employed Staten Islanders for 52 years, before closing in 1976. Now owned by the Atlantic Salt Company, the 10-acre property is a depot for road de-icing salt for New York State, New Jersey, and Connecticut.&#8221

It’s that grungy, creepy, abandoned feeling that keeps people coming to industrial sites like Atlantic Salt, but normally these spaces are off-limits. Now’s your chance to see the space — without breaking any laws. The site will be open to the public for LUMEN, Saturday, June 26, 4pm-12am. The LUMEN Festival will showcase amazing contemporary video/projection and performance art both outside and onto the space. Atlantic Salt is right on the waterfront, so get ready for views of NYC and NJ, plus up-close views of the many tugboats & container ships that float up and down the Arthur Kill.

The festival will include performances throughout the day, raffles featuring artists’ work, as well as an open bar sponsored by Brooklyn Brewery from 9pm-11pm. Participating artists and collectives include: Alex Villar, Alix Pearlstein, Scott Peel, Lena Thuring, Grace Exhibition Space, Flux Factory, and Steven Lapcevic, among many others. For a complete listing of all participating artists, visit: LUMENFEST.org. Atlantic Salt is located at 561 Richmond Terrace, a 10-minute walk or bus ride from the Staten Island Ferry.

LUMEN will be free of charge and open to the public. Contributions are welcome at LUMEN’s Kickstarter page.

The mission of COAHSI is to cultivate a sustainable and diverse cultural community for the people of Staten Island by: 1) making the arts accessible to every member of the community- 2) supporting and building recognition for artistic achievement- 3) providing artists, arts educators, and organizations technical, financial, and social resources to encourage the creation of new work. COAHSI does extensive outreach to communities that are underserved geographically, ethnically, and economically. The organization works hard to impact the arts across all borders.