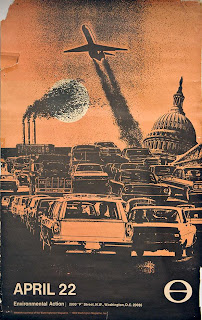 On Earth Day 1970, people around the country, mostly college students, demonstrated on behalf of environmental causes. Forty years later, the environmental movement has come into the mainstream and secured state and federal agency leadership positions. More importantly, the movement has significantly improved the quality of our rivers, lakes and forests and in doing so has provided for the proliferation of local wildlife. While there are certainly challenges that remain &#8211 invasive species, inappropriate development, toxic exposures, nitrate and storm water management, climate change, the plight of amphibians, migratory birds, and bats &#8211 the environmental successes of the last 40 years should not be underestimated.

By and large, the first Earth Day was much like those that have followed: politicians, celebrities, concerts, environmental fairs, and the like. But Earth Day 1970 was a radical proposition in a time before the Environmental Protection Agency (EPA) was founded, and before there were state sanctioned bodies like the Department of Environmental Conservation (DEC) to protect the environment. At Boston’s Logan Airport, where a few hundred demonstrators had gathered in what a CBS reporter called a &#8220thoroughly peaceful and non-disruptive demonstration&#8221, police charged the crowd and arrested 13.

In the 40 years since that first Earth Day the Adirondack region has seen a revolution in the way we interact with our environment. Sure, we can point to the founding of DEC (1970), the establishment of the EPA (1971), the Clean Air Act (1970), and the Clean Water Act (1972), State Environmental Quality Review Act (1980), the Superfund Law (1980), and the Environmental Protection Fund (1993) but there has been a leadership revolution as well. Today, Pete Grannis, who was part of the first Earth Day demonstrations, is now the head of the DEC. Judith Enck, the state’s leading environmental activist in the 1980s, is now the Administrator of EPA’s Region 2.

Changes in the natural environment have been extraordinary. The Hudson River, once an open sewer where no one dared to boat, never-mind swim or fish, now bustles with recreation activities in summer. According to the DEC, the number of seriously polluted waters in the state has fallen by 85% and Sulfur Dioxide pollution is down by 90%, with a corresponding improvement in Acid Rain.

Successes we don’t typically consider include the closure of outdated and poorly located landfills (more than 100 in Adirondacks alone), the elimination of the tire dumps (including more than 27 million tires statewide), the cleaning up of Superfund and brownfield sites (1,800 statewide) and the thousands of water bodies large and small around the state that have been cleaned-up in the last 40 years through waste-water management.

We may not consider those victories as much as we should, but local wildlife certainly has. In 1970 there was just one occupied Bald Eagle nest in New York State, in 2010 there are 173. Eagles and other raptors we rarely saw in the 1970s and 1980s, birds like the peregrine falcon, are now fairly frequent sights- ravens and osprey have returned to the Adirondacks. Wild turkeys have exploded from about 25,000 in 2010 to 275,000 today, and so turkey hunting has returned to the Adirondacks. Native trout have been returned to more than 50 ponds according to the DEC, and the average number of fish species has increased by a third offering increased angling opportunities. Beaver, fisher, and otter have flourished in cleaner, more diverse waters and so trapping seasons have returned for those species. In 1970 there were no Moose in the Adirondacks, today there are 400 to 500 in the region.

Clean water, clean air, and open spaces were the demands at the first Earth Day in 1970. Those demands were met by legions of combative corporations, industry alliances, business groups, chambers of commerce and their attorneys. A look at a local paper on any given day shows that those battles continue, but 40 years has shown that the environmental movement has been an enormous success. Despite the attacks and &#8220enviro-nazi&#8221 insults, the former hippies, political greens, organization environmentalists, and wildlife conservationists who have made up the environmental movement have much to be proud of.