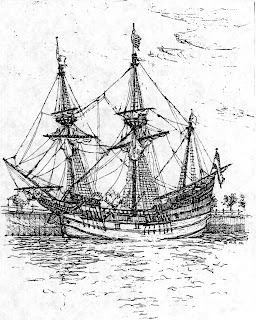 William T. (Chip) Reynolds, Director, New Netherland Museum and Captain, Replica Ship Half Moon has announced that volunteer crew are needed to move the Half Moon from its winter berth at King Marine, in Verplanck, NY, to Peckham Wharf, Athens, NY from April 9 to 11th. This will be the first shake down cruise of the season as the ship is moved to Peckham Wharf in Athens for outfitting.

The voyage will pass the Hudson Highlands, Lange Rack, and along the Catskills. Both experienced crew and new comers are welcome. Crew should plan to board the ship at King Marine in Verplanck on Friday afternoon, April 9, and depart the ship Sunday afternoon in Athens. This is a working cruise, with emphasis on running our rigging, getting systems operational, and starting our annual refresher training with safety harnesses and procedures. In Athens the crew will proceed with rigging sails, installing tanks, and renewing woodwork.

If you are interested in joining the voyage, contact Karen Preston at pk1483@aol.com. Be sure to include your full name, address, and telephone in your e-mail, and tell &#8216-em we sent ya!