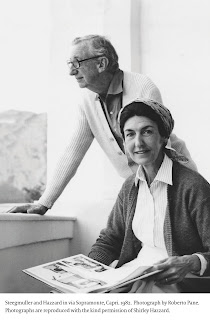 A new exhibit which will run for the next year at the The New York Society Library. &#8220Literary Lives: The World of Shirley Hazzard and Francis Steegmuller&#8221 will feature Shirley Hazzard, award-winning author, and Francis Steegmuller, award-winning author, Flaubert expert and translator along with unique images from Hazzard’s private collection.

Shirley Hazzard, author of The Transit of Venus and The Great Fire, unlocks her private collection of personal photographs and books that gives a first-ever look at the life she shared with her husband, Francis Steegmuller, whose pioneering work on Flaubert, Cocteau, and de Maupassant brought him worldwide acclaim.

On view at The New York Society Library, this FREE exhibition will also display photographs of European landmarks taken by Steegmuller, a gifted photographer whose work behind the lens has not been seen before. A 44-page catalogue accompanies the exhibit which will run from March 24, 2010 to January 31, 2011 at the New York Society Library’s, Peluso Family Exhibition Gallery, 53 East 79th Street, between Madison and Park Avenues, New York, NY. Admission is free.