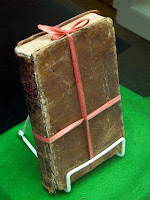 In observance of the 200th anniversary of the classic work of literature, A History of New York by Washington Irving, the New York State Historical Association’s Research Library will have its copy of the first edition on display from December 2009 through February 2010. Commonly known as Knickerbocker’s History of New York, the book was published in December 1809 and was an immediate success.

Irving, in his satirical history, poked fun at the early Dutch governors of the colony of New Netherlands and their “reigns.” He drummed up interest in the book before its publication by having an announcement published in a New York City newspaper asking for anyone with information regarding the disappearance of an old man named Diedrich Knickerbocker to contact the Columbian Hotel – stating that he had left without paying his bill. Subsequent notices said that if Mr. Knickerbocker was not found, a manuscript that he left behind would have to be published as a book and copies of the book sold to pay off his debt. Finally, a notice appeared advertising the book, A History of New York, by Diedrich Knickerbocker.

New Yorkers, who had become interested in the disappearance of the old man, bought up the book. Most realized the story of Knickerbocker’s disappearance was a hoax since there was no Columbian Hotel in New York, but they went along with the fun, purchased the book, and found it to be highly humorous. Irving’s history became a classic. The book is still in print and the humor within is still appealing today.

The NYSHA Research Library is located next to the Fenimore Art Museum on Route 80 in Cooperstown, N.Y. and is open from 10 – 5 p.m. Monday through Friday. There is no charge to see the display featuring Knickerbocker’s 1st edition and subsequent editions. Also on display is the exhibit Doubleday and the WPA, which details the creation of Cooperstown’s Doubleday Field as a WPA project in the 1930s. The library will be closed for the Christmas holidays from December 23 to January 10. For more information, please call 607-547-1470 or visit www.NYSHA.org.