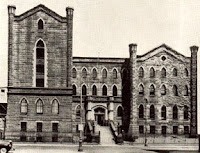 At the Raymond Street Jail in the City of Brooklyn, New York State’s last execution by hanging took place 120 years ago last week. German immigrant John Greenwall, a tailor by trade and a thief by rap sheet and reputation, was hanged for the murder of Manhattan hat firm senior staffer Lyman Smith Weeks during a burglary of the victim’s DeKalb Avenue home on March 15, 1887. After Greenwall’s hanging Dec. 6, 1889, all capital sentences in the state were carried out by electrocution.

To note that date marking the transition from &#8220the noose&#8221 to &#8220the chair&#8221 in capital punishment history, the New York Correction History Society (NYCHS) has unveiled a two-part online presentation entitled &#8220Brooklyn Jail Scene of NYS’ Last Hanging Execution 120 Years Ago Dec. 6th&#8221 that examines the case in detail. The study raises questions about the prosecutorial conduct and judicial rulings that resulted, after two trials, in the condemned man’s state-implemented death.

The presentation also relates how Greenwall’s jail staff friend, an African-American porter, attempted to prove the convict innocent in a most bizarre way. Also, how the jail’s Catholic chaplain purchased a burial plot for Greenwall in East Flatbush’s Holy Cross Cemetery where 27 years later the priest himself was buried, having died a few days after being victimized by a anarchist’s attempt to poison hundreds at a Chicago dinner to honor a newly-named archbishop.