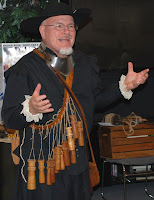 Rogers Island Visitors Center in Fort Edward is hosting dinner with Samuel de Champlain on October 24th at the Tee Bird North Golf Club (30 Reservoir Road, Fort Edward). Local Chefs, Neal Orsini owner of the Anvil Restaurant in Fort Edward and Steve Collyer, researched the stores list aboard Champlain’s ship, the Saint-Julien, to develop a dinner menu using European, 17th century ship and New World ingredients. Some menu items were standard fare aboard 17th century ships, but the Saint-Julien was 500 tons, carried more than 100 crew and had a galley which meant that even livestock was brought on board aboard, if only for the captain and officers.
Don Thompson, who has spent this Quadricentennial year traveling throughout New York, Vermont and Canada portraying Samuel de Champlain, will serve as a special guest presenter bringing the story of de Champlain’s North American explorations to life.

There will be a cash bar at 5 pm- and dinner served at 6 pm. The price is $22 for Rogers Island VC members, $25 for non-members and $8 for children under 12. Special prize baskets have been donated for a raffle.

One thought on “Have Dinner With Samuel de Champlain Oct. 24th”