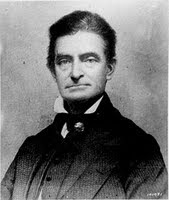 This year marks the 150th anniversary of abolitionist John Brown’s anti-slavery raid on Harpers Ferry, Virginia, his subsequent execution and the return of his body to North Elba, Essex County, NY.

Over at Adirondack Almanack I’ve been writing a series of posts &#8211 The Last Days of John Brown &#8211 to commemorate Brown’s struggle to end slavery in America, and both here and at the Almanack I’ll be reporting on events as the anniversary approaches. So far local activities include a lecture, a symposium, and a reenactment of the return of Brown’s body to North Elba. It all kicks off with a lecture this Saturday, October 10th, with a lecture by historian Zoe Trodd at 2:00 PM, at John Brown’s Farm.

Here is the event announcement:

A Living Legacy: John Brown in the Anti-Lynching Protest Tradition, a lecture by Zoe Trodd. Protest writers have long pointed to the abolitionist past as central to present and future social change. At the heart was of this living legacy was one figure: John Brown. This lecture will trace the presence of Brown in anti-lynching literature from the Niagara Movement to Langston Hughes. Trodd is the author of Meteor of War: The John Brown Story- American Protest Literature- and The Tribunal: Responses to John Brown and the Harper’s Ferry Raid. This event is presented by John Brown Lives!