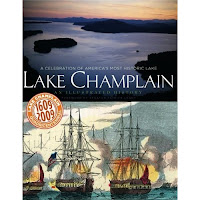 Adirondack Life writer Tom Henry will deliver a slide presentation entitled &#8220Exploring Old Port Towns Along Lake Champlain: Curious Stories Behind Their Relics&#8221 on Saturday, October 3rd at Northwoods Inn in Lake Placid, NY. From Shelburne’s elegant passenger steamships to Bridport’s world-famous 19th-century racehorses to Moriah’s strange subterranean world of railroads and iron mines, this slideshow of now and then images from old port towns around Lake Champlain will help us visualize many of the 400-square-mile lake’s unusual early enterprises.

celebrates America’s most historic lake and offers stunning photos, vintage postcards, paintings, maps and military history. Tom Henry’s portion of the book “Towns Along the Lake” provides some of the book’s most interesting writing. He highlights each of Lake Champlain’s principle shoreline communities and provides their link to the lake’s history.

The evening begins at 6:30pm with a half hour cash bar cocktail reception with Tom Henry. Mr. Henry will deliver his presentation at approximately 7:00pm. Following the presentation, we invite any of our guests to join us in our Northern Exposure restaurant for dinner with Mr. Henry.