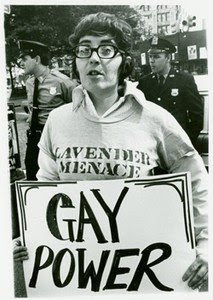 June 28, 2009 will mark the 40th anniversary of the historic Stonewall Riots that occurred in Greenwich Village, New York. Many cite the riots as the birth of the Gay Rights Movement in the United States. From June 1969 until June 1970, gays and lesbians in New York City radicalized in an unprecedented way founding several activist groups that created a new vision for Gay Liberation. The exhibition 1969: The Year of Gay Liberation charts the emergence and evolution of this new vision from the Stonewall Riots to the first LGBT (Lesbian, Gay, Bisexual and Transgender) pride march on Christopher Street in June 1970.

All of the materials for this exhibition were drawn from the LGBT collection in the Manuscripts and Archives Division of The New York Public Library. 1969: The Year of Gay Liberation will be on display at The New York Public Library’s Stephen A. Schwarzman Building at Fifth Avenue and 42nd Street from June 1, 2009 to June 30, 2009. Additionally three related public events will be presented in June. Admission to the exhibition and programs is free.

The exhibition features original photographs, pamphlets, police reports, newspapers, and letters. Included are materials relating to activist groups formed between 1969-1970 such as Gay Liberation Front, the Radicalesbians, Gay Activists Alliance, and Street Transvestites Action Revolutionaries. Other materials that can be found in the exhibition include a letter to Governor Nelson A. Rockefeller by Jim Owles, President of the Gay Activists Alliance, asking to meet to discuss Gay rights. Many of the photographs featured were taken by activist Diana Davies who captures events such as a march by the Gay Liberation Front in Times Square and protests by gay NYU students for equal rights. The exhibition shows that while each activist group fought for Gay Rights differently, with some more radical than others, they all shared the unified goal of equal treatment in society.

“This exhibition charts a historic and pivotal moment in history for gays and lesbians that goes beyond New York City,” says Jason Baumann, Curator and Coordinator of Collection Assessment and LGBT Collections at The New York Public Library. “The year 1969 marks the first time homosexuals united, demanded, and were willing to fight for full inclusion within American society. As a result of the actions taken during this time gays and lesbians marked a paradigmatic shift in the ways that not only they saw themselves but also how the world would see them.”

The LGBT collection at The New York Public Library continues to be one of the largest and most thorough in the country. The collections include the archives of pioneering LGBT activists, such as Morty Manford, and Barbara Gittings and Kay Tobin Lahusen- the papers of scholars, such as Martin Duberman, Jonathan Ned Katz, and Karla Jay- organizational archives of pivotal civil rights groups, such as the Mattachine Society of New York and Gay Activist Alliance- and the papers of LGBT writers, such as W.H. Auden, Virginia Woolf, and Joseph Beam. The Library’s collections also include major archives in the history of the AIDS crisis, extensive holdings in the history of LGBT theatre, and the Black Gay and Lesbian archive.

1969: The Year of Gay Liberation will be on view from June 1, 2009 through June 30, 2009 in the Stokes Gallery (third floor) at The New York Public Library’s Stephen A. Schwarzman Building, located at Fifth Avenue and 42nd Street in Manhattan. An accompanying online version of the exhibition will be launching in June and can be viewed at www.nypl.org. There will also be a travelling panel exhibition throughout the branches in June. Exhibition hours are Monday, 11 a.m. to 6 p.m.- Tuesday and Wednesday, 11 a.m. to 7:30 p.m.- Thursday through Saturday, 11 a.m. to 6 p.m.- Sunday, 1 p.m. to 5 p.m. Admission is free. For more information, call 917-ASK-NYPL or visit www.nypl.org

Free Public Events Related to the exhibition, at The Stephen A. Schwarzman Building: