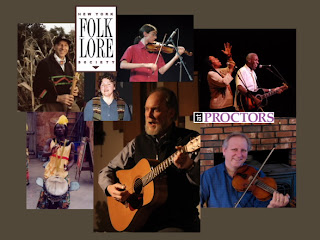 Witch tales from Otsego County. The famed Binghamton spiedie sandwich. Irish ballads sung in New York City. African-American spoken word genres. North Country quilting. The work rituals of Saratoga racetrack workers. What do all of these have in common? These are a few of the rich and varied traditions of New York State, which the New York Folklore Society has been documenting and helping to preserve since 1944.

To help celebrate sixty-five years of the Society’s work, and to coincide with the release of the latest issue of Voices, the Society’s bi-annual journal, the New York Folklore Society announces “Voices: Roots & Branches of New York Folk Music”, a benefit concert to be held on Friday, May 29, 2009 in Schenectady, New York at 7 p.m.

A Reception/Meet the Artists party will precede the concert at 5:30 p.m. in the Robb Alley at Proctors. The concert begins at 7 p.m. (Reception and Concert: $41.50, Concert only: $21.50). All proceeds will benefit the New York Folklore Society, a service organization dedicated to the study, promotion, and continuation of New York’s diverse folklore and folklife. Tickets are available through the New York Folklore Society, at 518-346-7008, or at http://www.proctors.org/events. A portion of the ticket price is tax deductible.