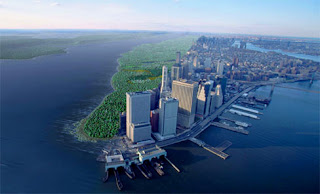 A new web site (now in Beta) sponsored by the Wildlife Conservation Society shows viewers what New York City looked like before it was a city. After nearly a decade of research the The Mannahatta Project uncovers online the original ecology of Manhattan circa 1609. According to the site:

&#8220That’s right, the center of one of the world’s largest and most built-up cities was once a natural landscape of hills, valleys, forests, fields, freshwater wetlands, salt marshes, beaches, springs, ponds and streams, supporting a rich and abundant community of wildlife and sustaining people for perhaps 5000 years before Europeans arrived on the scene in 1609. It turns out that the concrete jungle of New York City was once a vast deciduous forest, home to bears, wolves, songbirds, and salamanders, with clear, clean waters jumping with fish. In fact, with over 55 different ecological communities, Mannahatta’s biodiversity per acre rivaled that of national parks like Yellowstone, Yosemite and the Great Smoky Mountains!&#8221

The goal of the Mannahatta Project is no less than &#8220to re-start the natural history of New York City.&#8221 The site includes a virtual Mannahatta map that allows you to see Mannahatta from any location, block-by-block species information, lessons on the science and technology used to create the site, hundreds of layers of digital data, place-based lesson plans for elementary and high school students that meet New York State standards, an online discussion page, and event listing.

Recent updates to Mannahatta include the ability click on a city block to find out what type of plants and animals called it home, whether the Lenape people lived or worked there, and what kind of landscape features appeared on that block. You can also use the slider bar to fade from Mannahatta to modern day to see how the island has changed in the last 400 years.

Last week a related multimedia exhibit &#8220Mannahatta/Manhattan: A Natural History of New York City&#8221 also opened at the Museum of the City of New York.