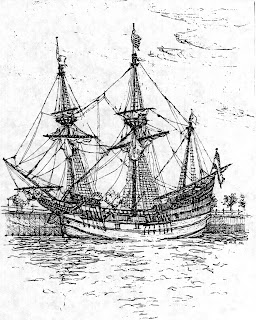 As part of the celebration of the 2009 Hudson-Champlain Quadricentennial the New York State Office of Cultural Education (OCE) will present the exhibition “1609,” which will re-examine Henry Hudson’s voyage, the myths that surround it, and explore the legacies of Hudson’s unexpected discovery.

The State Museum, State Archives, State Library and State Office of Educational Broadcasting, which make up OCE, are collaborating on the “1609” exhibition. It is scheduled to be open July 3, 2009 through March of 2010 in the New York State Museum’s Exhibition Hall.

Other quadricentennial events will include a two-month tour along the Hudson River and Champlain Canal, led by the New York State Museum’s historic Day Peckinpaugh, a 259-foot, 1921 canal boat. The Half Moon, historic barges and other large working boats will also participate in the tour in August and September 2009. It will stop at 15 ports from Burlington, Vt. to New York Harbor. Visitors will be able to step onboard to view exhibits on 400 years of maritime progress and advancement. The tour is organized by the Erie Canal National Heritage Corridor, in conjunction with the State Museum, Saratoga National Historical Park and the New York State Canal Corporation.

The “1609” exhibition will be presented in four parts. The first section will focus on what life was like for both the Dutch and Native Peoples of New York before 1609 and the events of that year. The visitor will then look at the myths that Hudson planned to come here, and that Native Americans greeted him and his crew with joy and awe. The exhibition will attempt to dispel those myths and explore with the visitor what is known about Hudson and the 1609 voyage and the Native American response. The third section will confront the myths relating to the short-term impact of the voyage – the consequences for the Dutch and the Native Americans. Finally, the visitor will be able to examine the long-term legacy of the Native Americans and Dutch, and how they affected subsequent historical events and American culture today.

In addition to artifacts from throughout OCE collections, “1609” will also feature paintings by Capital District expert historical artist L.F. Tantillo.

Archaeologist James Bradley, an expert on Native Americans, and Russell Shorto, an authority on colonial Dutch history, have written text for the exhibition. Bradley is the author of “Before Albany: An Archaeology of Native-Dutch Relations in the Capital Region 1600-1664,” and a guest curator for portions of the exhibition. Shorto, who resides in the Netherlands, authored “The Island at the Center of the World,” the epic story of Dutch Manhattan and the forgotten colony that shaped America.

Steven Comer, a Mohican Native American living within the original territory of the Mohican people, has provided cultural information and consulting for the project.

To complement the exhibition, the Museum also will present a program, “The Stars of 1609” on Saturdays, May 2 and 30 and June 6 and 13 at 2 p.m. and 3 p.m. Participants will peer through the ages to see the night sky as it looked to Henry Hudson and his crew in 1609. There also will be a discussion about the navigational techniques of European explorers, their tools and equipment and 17th-century astronomy. The program is free but visitors must obtain tickets at the Museum’s front lobby desk.

The New York State Museum is a cultural program of the New York State Education Department. Founded in 1836, the museum has the longest continuously operating state natural history research and collection survey in the U.S. The State Museum is located on Madison Avenue in Albany. It is open daily from 9:30 p.m. to 5 p.m. except on Thanksgiving, Christmas and New Year’s Day. Further information can be obtained by calling (518) 474-5877 or visiting the museum website.