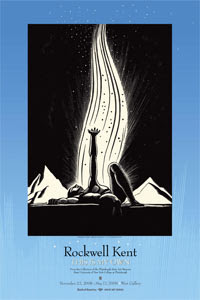 The next exhibition in the Great Art Series &#8212- Rockwell Kent: This is My Own – opens at the New York State Museum on November 22. On view through May 17, 2009 in the Museum’s West Gallery, the exhibition is the 20th installment of the Great Art Exhibition and Education Program, which brings works from New York State’s leading art museums and collections to the State Museum. This exhibition will feature works from the collection of the Plattsburgh State Art Museum, State University of New York at Plattsburgh, the most complete and balanced collection of Kent’s work in the United States. The collection was established by a gift and bequest from Kent’s wife, Sally Kent Gorton. This exhibition is curated by Cecilia M. Esposito, director of the Plattsburgh State Art Museum.

&#8220We at Plattsburgh, and I as a Regent, are delighted to share the life work of Rockwell Kent with visitors to the New York State Museum from across the state and the nation,” said James Dawson, member of the State Board of Regents. “This powerful and unique exhibition will give visitors an opportunity to engage with, and understand, the life and artistic contributions of Rockwell Kent to American art. As a faculty member at the State University of Plattsburgh, I have been familiar with the Kent Collection for decades. So, I am delighted to see that others in the state and nation will have this same profound opportunity to share in Kent’s incredible artistic talent.”

A critically acclaimed artist who provided the illustrations for such classics as “Moby Dick” and the “Canterbury Tales,” Kent succeeded in multiple endeavors during his lifetime. He was a painter, muralist, illustrator, printmaker, book designer, graphic artist, architect, builder, writer and editor, lecturer, navigator, world traveler and political and social activist.

Kent once said that “art is no more than the shadow cast by a man’s own stature.” This exhibition is unique in the breadth of materials on display, including hundreds of items that chronicle Kent’s life and work, reflecting remarkable personal experiences and a deep sense of moral and political principle. On display are paintings, drawings, prints, books, bookplates, photographs, dinnerware, advertising art and more. “Rockwell Kent,” a documentary produced by Frederick Lewis, and the book, “Rockwell Kent: The Art of the Bookplate” will be for sale in the Museum Shop.

Born in Tarrytown in 1882, Kent experienced a comfortable, upper middle-class lifestyle until the sudden death of his father in 1887. As a young boy he developed a resilience and remarkable work ethic that was evident in all of his future endeavors.

From 1900 through 1902, while studying architecture at Columbia University in New York City, Kent attended painter William Merritt Chase’s summer school for art at Shinnecock Hills, Long Island. He changed his studies to painting and continued classes with Chase in New York. He spent the summer of 1903 with artist Abbott H. Thayer in New Hampshire. Bolstered by the sale of two paintings he quit Columbia and enrolled in the New York School of Art, where he was instructed by Robert Henri, the leader of what is now known as the “Ashcan School.”

Kent achieved both critical and financial success as an artist during the 1920s and 1930s. He became well-known for his book illustrations, bookplates and commercial work. Private collectors and major museums, including the Metropolitan Museum of Art, acquired his paintings and prints.

Between 1918 and 1935, Kent traveled to remote parts of the world, often staying for long periods of time to learn about the people who lived there and to express and record his experiences through his paintings and books.

In 1915, during World War I, he was ordered to leave Newfoundland over fears that he was a German spy. While in Newfoundland he painted one of his major works, “House of Dread.” In Alaska, as in other countries he visited, Kent demonstrated his building skills, renovating an abandoned goat shed and turning it into a comfortable home. “Wilderness: A Journal of Quiet Adventure in Alaska” chronicled his adventures there. He also traveled to Tierra del Fuego, where he wrote “Voyaging” about his dangerous travels through the most exposed islands of the archipelago. “N by E” was about another hair-raising adventure &#8212- an ill-fated cruise he took to Greenland in 1929. He returned to Greenland in 1931 where he wrote “Salamina,” named in honor of his housekeeper and mistress. Kent also designed dinnerware by the same name.

Kent purchased a dairy farm in the Adirondacks, outside of the village of Au Sable Forks, in 1927 and named it Asgaard, meaning “home of the gods.” It served as his retreat for the rest of his life. From 1912 to 1968, Kent practiced the time-honored art of the bookplate, creating more than 185 custom-designed bookplates in response to mail orders that came his way, including one for Joseph P. Kennedy Sr.. He also pursued wood engraving, a passion that rivaled his great love for painting.

Kent painted several major murals during the 1930s and 40s. His designs for the 1939 Christmas Seals campaign were used on billboards, stamps and posters. During this time, Kent also produced political art, becoming very active in social and political issues as a member of the Socialist Party he had joined in 1908. In 1953, he was summoned to appear before a subcommittee, chaired by U.S. Senator

Joseph McCarthy, to answer questions about his membership in the Communist Party. From 1957 to 1960, three major exhibitions of Kent’s work were held in the Soviet Union, and in 1960 he gave the country 80 canvases and 800 drawings and prints. He traveled to Moscow in 1967 to accept the International Lenin Prize for Strengthening Peace Among Peoples.

One of Kent’s last lucrative commercial contracts was with General Electric (GE). His painting of a solitary farmhouse on a winter’s night was reproduced in GE’s 1946 calendar and proved so popular that he was asked to provide another for the following year. In January 1946, Kent walked a picket line at GE in Schenectady at the request of the striking workers there. GE officials were not pleased and tried to cancel Kent’s contract but reneged after he threatened a lawsuit.

Kent died at the age of 88 and is buried at Asgaard. His gravestone bears the title of his first autobiography “This is My Own,” a line taken from “Native Land,” a poem by Walter Scott.

On February 14, from 1 to 3 p.m., the Museum will sponsor “ARTventures,” a program planned to complement the Kent exhibition. During a hands-on, art-making experience with instructor Peggy Steinbach, participants will visit the exhibition and then create their own interpretations in paint. Pre-registration is suggested. Call 518-473-7154 or e-mail psteinba@mail.nysed.gov. The program is limited to 15 participants. It is free for Museum members and $5 for non-members.

The New York State Museum is a cultural program of the New York State Education Department. Started in 1836, the Museum has the longest continuously operating state natural history research and collection survey in the United States. Located on Madison Avenue in Albany, the Museum is open daily from 9:30 a.m. to 5 p.m. except on Thanksgiving, Christmas and New Year’s Day. Admission is free. Further information c
an be obtained by calling (518) 474-5877 or visiting the Museum website at www.nysm.nysed.gov.