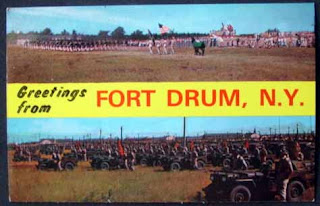 The Watertown Daily Times is reporting that 87 World War Two era barracks at Fort Drum are going to be torn down in the next month:

Those buildings, built in 1941, are being torn down to make way for more construction to accommodate units of the 10th Mountain Division. South post will become the new home for the 91st Military Police Battalion, 7th Engineer Battalion and 63rd Explosive Ordnance Device Battalion — which is currently deployed to Baghdad, Iraq.

We want to tear them all down eventually,&#8221 said James W. Corriveau, the public works director for Fort Drum. &#8220We are building new facilities on that space and falling in on the old infrastructure.&#8221

The demolition of old motor pools along Gasoline Alley has been ongoing this summer.

Here’s a gem from someone with a [ahem] sense of history:

Here is a little history from the Fort Drum website:


With the outbreak of World War Two, the area now known as Pine Camp was selected for a major expansion and an additional 75,000 acres of land was purchased. With that purchase, 525 local families were displaced. Five entire villages were eliminated, while others were reduced from one-third to one-half their size.

By Labor Day 1941, 100 tracts of land were taken over. Three thousand buildings, including 24 schools, 6 churches and a post office were abandoned. Contractors then went to work, and in a period of 10 months at a cost of $20 million, an entire city was built to house the divisions scheduled to train here.

Eight hundred buildings were constructed- 240 barracks, 84 mess halls, 86 storehouses, 58 warehouses, 27 officers’ quarters, 22 headquarters buildings, and 99 recreational buildings as well as guardhouses and a hospital. Construction workers paid the price, as the winter of 1941-42 was one of the coldest in North Country history.

The post also served as a prisoner of war camp. Of those prisoners who died here, one Italian and six Germans are still buried in the Sheepfold Cemetery near Remington Pond