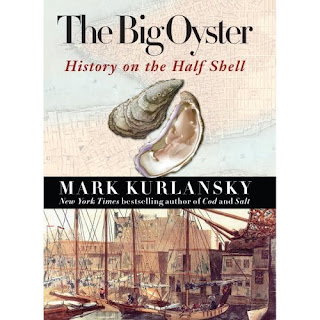 I just finished reading Mark Kurlansky’s The Big Oyster: History on the Half Shell

. It’s basically a short history of New York City told through the city’s natural environment and one of its most significant natural resources (possibly second only to its natural harbor) &#8211 the oyster.

Cod: A Biography of The Fish The Changed the World

The Basque History of the World

All have implications for New York History &#8211 according to esteemed Iroquoisian Dean Snow, the word Iroquois is derived from a Basque word, a demonstration of their subtle impact in our region during their search for Cod off the Grand Banks, Cod they then salted to preserve. Throughout all three books Kurlansky includes historic recipes and other culinary history.

The Big Oyster is a must read for those interested in natural history, marine history, the Atlantic World, and food history as well as those with a taste for urban history and the New York City underworld of oyster cellars, cartmen, and seedy public spaces of all kinds.


This program, in collaboration with NY/NJ Baykeeper and the New York Harbor School, seeks to increase stewardship among residents of the New York-New Jersey Harbor Estuary by working with volunteers from schools and community organizations in New York City to help prepare an oyster reef off the Tribeca waterfront. The project builds on the results of NY/NJ Baykeeper oyster reef restoration in New Jersey and research conducted by The River Project at its Pier 26 field station in New York.

A taste of the interview with Kurlansky:


Erik Baard: The Dutch and British settlers used that shell lime to construct stone homes. And I’m kind of curious about the many ways oysters were used. It’s a very versatile product, the meat, the shell being used for construction of buildings… How else were they used?

Mark Kurlansky: They were used in roads, you know, paving roads and in landfill. They were use to fertilize soil, to increase the lime content of the soil, which used to be called “sweetening the soil.” You could just plow oysters under. In fact, Europeans who visited were surprised to see that. The European way was always to grind it up and create this lime powder that you use as fertilizer, but New York farmers used to just take whole shells and put them in the earth.

Erik Baard: And this would lower the acidity?

Erik Baard: Now also, Pearl Street, you clarified some mythologies on that.

Mark Kurlansky: Yes, for some reason there’s a lot of mythologies about Pearl Street. I was just on Pearl Street last Saturday, I was thinking about this. Pearl Street was the waterfront in Dutch times, in the original Manhattan. It continues now several blocks further because of landfill. And there’s lots of stories about why it was called Pearl Street. But the real reason seems to be that on the waters edge there, the Indians had left large piles of shells.

Erik Baard: It wasn’t paved with the oyster shells?

Mark Kurlansky: No you often hear that but, one of the first things I noticed when I was researching this book was that the street got its name before it was paved