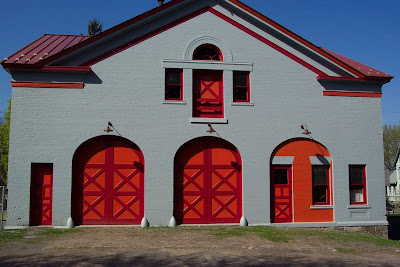 The Cayuga Museum has announced the name of the carriage house theater currently undergoing restoration. When the theater re-opens in Spring 2012, it will be named Theater Mack in honor of the Maciulewicz family and their business, Mack Studios.

Mack Studios, now an internationally famed design company, has long donated all of the exhibit furniture and display work at the Cayuga Museum. Peter and Carol Maciulewicz have been the largest private donors to the carriage house restoration project. Since the Museum Board of Trustees decided to save the building in the 1990’s, the Museum has spent more close to $400,000 on rehabilitating the carriage house.

“Carol and I are pleased to be able to help bring this project to fruition,” said Peter Mack. “We can remember coming to the carriage house for shows when we were kids. We are committed to seeing it brought back to life.”

Drivers on Washington Street will have noticed the vibrant exterior paint job that let passers-by know that something exciting was happening at the carriage house. The first phase of this renovation project, the restoration of the 1850 carriage doors, replacement of all 28 windows, and new stairways and exits was completed in 2010.

The Cayuga Museum will use Theater Mack for its own programming &#8212- lectures, slideshows, special events and more. The annual Theodore Case Film Festival, which has been held at both Cayuga Community College and the Auburn Public Theater, will come home to the Case property. And the Museum will rent Theater Mack to other organizations, creating revenue to support Museum operations. Theater Mack is one of the venues for the new Finger Lakes Musical Theatre Festival set to begin in Spring 2012.