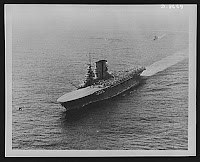 The public is invited to a panel discussion this Sunday, December 6th, at 2:00 pm at the Saratoga Library (13650 Saratoga Avenue in Saratoga Springs). Saratoga Historical Foundation Historian Ray Cosyn will moderate as veterans from World War II recount their memories.

Participating in the panel will be George Cooper who flew P47’s in the European Theater with 77 missions- Herbert Kwart who flew a Flying Fortress as part of the 8th Air Force with 35 missions- Ed Pack, with the 59th Signal Battalion and later the 8th Corp part of those liberating the concentration camps- Bud Rideout, on of the Flying Tigers- and Mac McCaughey part of the 94th Division who landed on Omaha Beach.

Light refreshments will be served. The event is free to the public. The Saratoga History Museum is sponsoring the event.

Photo: USS Saratoga During World War Two. From the collections of the Library of Congress.