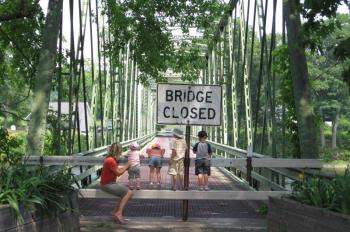 On a chilly Sunday morning, January 23rd, the Washington County Association of Snowmobile Clubs presented Hudson Crossing Park with a check of $4000 as their contribution towards the local match of the transportation enhancement grant awarded to rehabilitate Dix Bridge, a centerpiece of the park that connects Saratoga and Washington Counties. 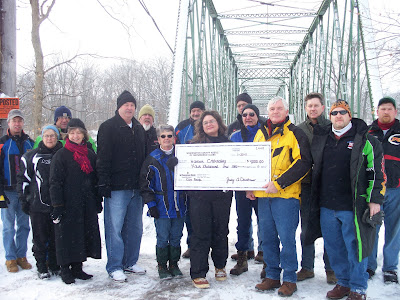 The clubs of the Association value the opportunity to put in place a safe, non-ice trail crossing from Washington County into Saratoga County. With the restored Dix Bridge providing the trail connection, snowmobilers will finally be able to ride from many parts of New York State into Washington County and access the excellent trail systems of Vermont, New Hampshire, and Maine. The clubs that donated $500 from their own fund-raising efforts include Battenkill Snowdrifters, Granville Border Riders, Greenwich Trail Blazers, Hartford Ridge Riders, Hoosic Trail Masters, Kingsbury Barnstormers, Sno-Kats and Northern Washington County Trails Blazers.

The Board of Directors of Hudson Crossing Park undertook the challenge to preserve the Dix Bridge over ten years ago. In a pro-active intermuniciapal effort, Saratoga and Washington Counties, the Towns of Saratoga, Northumberland, and Greenwich, and the Historic Saratoga-Washington on the Hudson Partnership have come together to preserve a significant piece of history and provide safe passage over the Hudson River for hundreds of pedestrians, bicyclists, and snowmobilers. Funding for this significant project will be acquired primarily through a federal transportaion enhancement program. Local organizations and agencies are coming together to provide the remaining funds necessary.

Engineers from Greenman-Pedersen, Inc. have begun work on plans to rehabilitate the historic Dix Bridge. Extensive structural inspections have taken place to ensure proper stabilization of the bridge. Work on the Dix Bridge will commence in 2011. It is hoped the Bridge will re-open as a shared use recreational trail late in 2012. The bridge will not be open to automobiles.

For more information about the Hudson Crossing Bi-County Park, call Marlene Bissell at 518.859.1462 or visit: www.hudsoncrossingpark.org. Hudson Crossing is a bi-county educational park project centered on and near the Champlain Canal Lock 5 Island of the Hudson River.