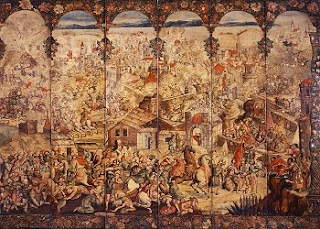 An extremely rare mother-of-pearl-inlaid Mexican folding screen, commissioned about 1700 by the viceroy of New Spain has been purchased by the Brooklyn Museum from Salvart Limited in London.

The work was officially accessioned by the Museum’s Board of Trustees on April 19. Representing a combination of Asian, European, and American artistic traditions, this six-panel screen is encrusted with mother-of-pearl and painted with oil and tempera.


At the time it was acquired, it was the only recorded surviving shell-inlaid folding screen, or biombo enconchado, that remained in private hands. The funds for this acquisition came from the proceeds of the sale of Vasily Vereshchagin’s Crucifixion by the Romans (1887), which was sold last November at Christie’s London for nearly $2.7 million to benefit the Brooklyn Museum’s Acquisition’s Fund.

These panels constitute half of a twelve-panel screen, created after Asian models by artists working in the circle of the celebrated Gonzalez family in Mexico City, where it was displayed in the state rooms of the capital’s viceregal palace. The other half of the screen is in the collection of the Museo Nacional del Virreinato in Tepotzotlan, Mexico. The complete screen was commissioned by Jose Sarmiento de Valladares y Aines, the count of Moctezuma y Tula, during his reign as viceroy of New Spain from 1696 to 1701. Appointed by Spain’s last Habsburg king, Charles II, Sarmiento declared his allegiance to the Habsburg dynasty in the New World by having the front of his monumental folding screen painted with a major Habsburg victory over the Ottoman Empire, a scene from the Great Turkish War (1683-87). He requested a hunting scene modeled in part after prints by the Medici court painter Johannes Stradanus for the back of the screen, which would have served as a backdrop for the women’s sitting room in the palace. Both sides of the screen are framed with a mother-of-pearl encrusted floral decorative border inspired by Japanese lacquerware created for the export market.

In 1701, only one year after Spain’s new Bourbon king, Philip V, had ascended to the throne, Sarmiento, a Habsburg-appointed viceroy, was recalled to Spain- he returned with his prized biombo enconchado in tow. The screen was later divided into two in Europe, and one half found its way to the United States by 1965, when it was recorded in a private collection in San Francisco- it entered the Museo Nacional del Virreinato by 1970. The Brooklyn Museum’s half of the screen was in England (Yoxford, Suffolk) for generations, in the collection of Cockfield Hall, until the family sold its residual contents, including the screen, at auction through Phillips East Anglia in 1996.

Japanese folding screens, which inspired the format of Mexican biombos, were introduced to the Americas in the early seventeenth century as both diplomatic gifts from Japanese embassies and as elite Asian exported goods. Asian screens found immediate favor with the viceroyalty’s prosperous elite, and by the 1630s local artists were re-creating the screens in a new world style for privileged private collectors. Paintings inlaid with mother-of-pearl (pinturas enconchadas), of which this work is also an exceptional example, developed later, about 1660, by Mexican artists who combined the European art of tempera and oil painting with Asian and Mexican lacquer and mother-of-pearl encrustation techniques.

This extraordinary six-panel screen will be the highlight of Behind Closed Doors: Power and Privilege in the Spanish American Home, 1492-1898, a traveling exhibition organized by Richard Aste, Curator of European Art at the Brooklyn Museum, where it will be on view September 20, 2013, through January 12, 2014, before continuing on to three additional U.S. venues.

Also accessioned at the same board meeting and purchased with funds from the sale of the Vereshchagin painting is Hacienda La Fortuna (1885), an Impressionist landscape of southern Puerto Rico by Francisco M. Oller (Puerto Rican, 1833-1917). As the most important Puerto Rican painter of his era, Oller was commissioned by the Barcelona emigre Jose Gallart Forgas to paint a series of portraits of his five Puerto Rican sugar plantations. The Museum’s new acquisition is an early morning view of Gallart’s most important plantation, La Fortuna, with rural workers gathering sugarcane before the planter’s home (seen in the distance), his warehouse at left, and his sugar mill at right. Hacienda La Fortuna was the only one of Gallart’s five hacienda painting commissions that Oller completed for his Spanish patron.

Oller was born and raised in San Juan but trained in Madrid and Paris, where he quickly fell under the spell of the Realist painter Gustave Courbet and painted with his friends Paul Cezanne and Camille Pissarro. The Puerto Rican Realist and Impressionist painter exhibited at several of the Paris Salons and at the 1875 Salon des Refuses. Back home, Oller took an active role in the abolitionist movement&#8211slavery was finally abolished in Puerto Rico in 1873&#8211and in pedagogy, establishing several art schools in the island’s capital.

Beginning June 6, Oller’s masterpiece of Puerto Rican industrial landscape painting will be on view in the Museum’s European gallery alongside paintings by his fellow avant-garde artists Courbet, Pissarro, and Claude Monet. Hacienda La Fortuna will later join the shell-inlaid Mexican folding screen in the Behind Closed Doors exhibition.