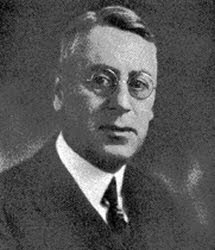 Research has taken me to more cemeteries than I can remember. Surrounded by hundreds of gravestones, I frequently remind myself that every person has a story. What often impresses me is that many people who are largely forgotten actually made a real difference in other people’s lives. Uncovering those stories from the past is humbling, carrying with it the realization that I’ll probably never approach the good works done by others.

Sometimes those good works seem to escape notice, and that was the sense that engulfed me as I read the obituary of Erwin Eugene Lanpher of Lowville. It reminded me of George Bailey from It’s A Wonderful Life, a regular guy who, as it turned out, was darn important to a lot of people.

Lanpher’s life seemed accomplished, but average—born in 1875- schooled at Lowville Academy, Union College, and Cornell- a year working as a government surveyor on the Panama Canal- working as an engineer for the Atlantic City water bureau- and a twenty-six-year career in the engineering department caring for Pittsburgh’s water system.

The Lanpher family was remarkable in at least one sense: Erwin’s great-great-grandfather moved from Rhode Island to Lowville in 1801, so they were among the earliest settlers of the region. Otherwise, Erwin appeared to have led the life of an average man who excelled at his job. In fact, Lanpher was revered in Pittsburgh for his long-term dedication to developing the city’s water system. In performing at such a high level, he affected the lives of thousands in a very positive way.

But Erwin Lanpher’s reach went far beyond developing an adequate system of delivering water to a city of over a half million people. Evidence reveals that the tremendous effect of his work is undeniable, yet incalculable. After all, who can measure the changes in the world from saving one life, let alone hundreds, or even thousands?

Lanpher was a stickler for quality. Besides designing an efficient system of distributing water to thousands of homes and businesses, he developed revolutionary methods of purification that drastically improved the process. The results were indisputable.

In 1904, at the age of 29, he began working on Pittsburgh’s water system. One of the main issues affecting water quality was the frequent turbidity of the Allegheny River, causing tons of mud to enter the city’s water system on a regular basis. Disease was a major consideration, and typhoid was a prime enemy, spread by ingesting contaminated water. 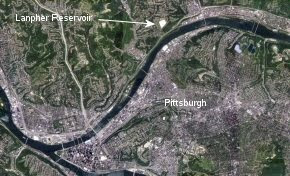 Another important set of statistics addresses the overall illness rate. In 1907, the Pittsburgh area had 5,652 cases of typhoid fever- in 1927, the population had risen by 130,000, but the total cases of typhoid fever had declined to 78 due to Lanpher’s work. Many cities sought his guidance to duplicate the results and dramatically enhance the quality of life.

The numbers are astonishing. Imagine the huge negatives that were avoided—the physical pain, the financial cost to patients, the pressure on the health care system, and the grieving for the deceased—all of it diminished as a result of Lanpher’s efforts. A decline in deaths from 648 to 12 during a 20-year period, with hundreds, perhaps thousands, of lives saved along the way. Amazing—and that’s just in one city.

Erwin died in 1930 at the age of 55. Seven months later, the city of Pittsburgh recognized and honored his legacy, unveiling a stone marker at one of the reservoirs he built and re-christening it the Lanpher Reservoir. Eighty years later, it still bears the same name.

Pittsburgh’s mayor and all the top city officials joined the Lanpher Memorial Committee for the ceremony, noting that, “&#8230- the city has published an official memorial book containing Mr. Lanpher’s speeches and public record. Mr. Lanpher was nationally known as a water works engineer and was consulted frequently by directors of water systems from all over the country.”

Now there’s a man who made a difference.

Photo Bottom: Location of the Lanpher Reservoir in Pittsburgh.