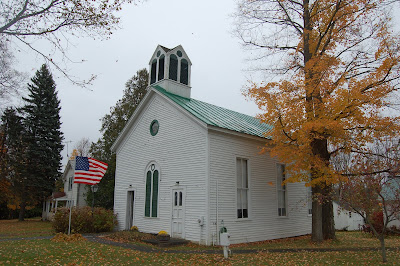 Adirondack Architectural Heritage is offering a special tour of Mt. McGregor in Saratoga County on Monday, July 18. Mt. McGregor is the home to Grant’s Cottage and Mt. McGregor Correctional Facility. The latter is a compound of buildings that sprawls along the mountaintop and was constructed in 1912 as a tuberculosis hospital by Metropolitan Life Insurance Company to care for its afflicted employees.

By the 1940s it had become a veteran’s camp, and then a center for people with developmental disabilities. After a period of vacancy, the site reopened in 1976 as a medium security prison. Just over the fence is the cottage where Ulysses S. Grant spent his final months completing his memoirs before succumbing to throat cancer in 1885.

The tour will be led by Wilton Town historian, Jeannine Woutersz, and will include a visit to the Wilton Heritage Museum, Grant’s Cottage, and Mt. McGregor Correctional Facility. The tour begins at 10 a.m. and ends at 4 p.m. The fee is $40 for AARCH and Wilton Heritage Society members and $50 for non-members. Reservations are required- the registration deadline is Friday, July 8.

Adirondack Architectural Heritage (AARCH) is the private, non-profit, historic preservation organization for the Adirondack Park region. This tour is one of over fifty events in their annual series highlighting the region’s architectural legacy. For more information on membership and our complete program schedule contact AARCH at (518) 834-9328 or visit their website.