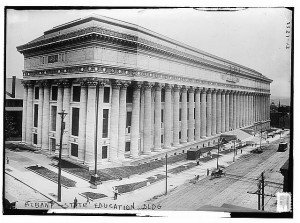 His approval of the Historians’ Law was a milestone event. New York was, and still is, the only state in the nation to declare preservation and dissemination of local history to be a public purpose so important that it is embodied in statute.
END_OF_DOCUMENT_TOKEN_TO_BE_REPLACED

Through several initiatives and statements, Governor Andrew Cuomo has become a highly visible proponent of New York State history. Taken together, his projects constitute evidence of vision, interest, and support. Cuomo sees history as something that can be used to deepen understanding, provide perspective, and help guide us into the future. END_OF_DOCUMENT_TOKEN_TO_BE_REPLACED