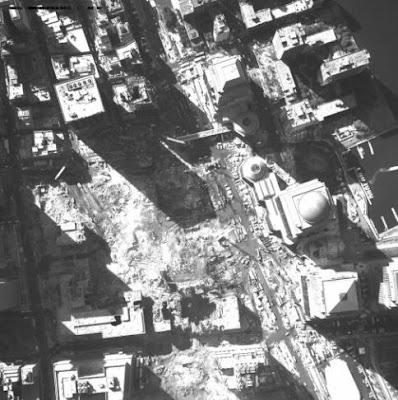 The New York State Archives, the nation’s largest repository of records of a state government, has introduced a new online exhibition entitled Ground Zero from the Air.

Based upon an archival collection of images commissioned from a private contractor by the New York State Office for Technology (NYS OFT), the website features aerial, infrared and computer generated imagery of Ground Zero, as well as photo images of recovery efforts. Also included
is a directory of related websites and New York State Government records contained within the New York State Archives related to the World Trade Center attacks and subsequent response efforts.

Principally accumulated during a series of flights that occurred between September 15 and October 22, 2001, the aerial imagery collected for NYS OFT was used to direct the efforts of first responders, identify unstable areas, pinpoint stairwells and elevator shafts, and coordinate removal of debris.

“As we consider the events of September 11, 2001 and the heroic efforts of first responders and, indeed, of many levels of local, state, and federal government in the weeks and months following the attacks, we at the New York State Archives committed ourselves to putting together an online exhibition that provided a unique look at this history event
for the 10th anniversary,” said New York State Archivist Christine W. Ward.

Ground Zero from the Air is the newest in a series of projects undertaken by the New York State Archives. Following the 2001 attack on the World Trade Center, the New York State Archives was instrumental in the creation of the World Trade Center Documentation Task Force, a
multi-institution group committed to identification, collection and preservation of public and private records that chronicle the attack and its aftermath and to determine future steps necessary to insure that the historical record is as complete as possible for use by future
generations.

Ground Zero from the Air may be found on the New York State Archives webpages online.

Photo: Ground Zero seen from above. Courtesy the NYS Archives. 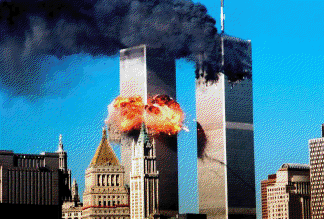 One month after the terrorist attacks of September 11, 2001, the New-York Historical Society committed its resources to a new initiative called, History Responds, with exhibitions, public events and educational initiatives. Since then, the Society has presented 17 special exhibitions relating to the attacks, 20 public programs, five community meetings, numerous school and teacher programs and, when the Society’s newly-renovated headquarters reopens on September 8, 2011, a permanent installation of photographs and other materials donated by survivors, witnesses, and rescuers.

To commemorate the tenth anniversary of September 11, the New-York Historical Society will present a special exhibition, Remembering 9/11, which will be free to the public. The exhibition opens on September 7, 2011 and will remain on view through April 1, 2012. The exhibition presents a selection of several hundred photographs taken by professional and amateur photographers in the immediate aftermath of the attack on the World Trade Center (originally collected in the independent exhibition “here is new york: a democracy of photographs”), as well as letters written to policemen and firemen- objects that were placed in makeshift shrines around New York- images and texts from the New York Times “Portraits of Grief” series- photographs of the Tribute in Light- and drawings of the National September 11 Memorial, designed by architect Michael Arad with the assistance of landscape architect Peter Walker.

As a special presentation for families, the Historical Society will also host a free reading by Vin Panaro, Bugler for the Fire Department of New York, and Katie Fuller, Museum Educator, of Maira Kalman’s book Fireboat, to be held in the Rotunda from 11:30 a.m. to 12:30 p.m. on Sunday, September 11, 2011.

“In the months immediately following September 11, 2001, the New-York Historical Society began a vigorous collecting initiative and exhibition program regarding the terrorist attacks,” Kenneth T. Jackson stated. “This was our responsibility, as the institution founded to gather, preserve and interpret materials related to the history of New York City and State and the nation. “On the tenth anniversary of the attacks, it is important that the Historical Society is continuing this effort with Remembering 9/11.”

Louise Mirrer, President and CEO of the New-York Historical Society, stated, “It takes a great historian to recognize the importance of his or her own historical moment, and to collect and preserve its effects. My predecessor, Kenneth T. Jackson is that great historian. On September 11th Ken recognized the tragedy of the day keenly, but saw also the need to collect and preserve so that future generations would understand what September 11th meant, for our city, our nation, our history. It is because of Ken’s work that our tenth anniversary exhibition Remembering 9/11 is able to document New York’s, and the nation’s, resilience along with the selfless acts of heroism, not only at the World Trade Center but also at the Pentagon and Shanksville.”

Remembering 9/11 is organized for the New-York Historical Society by Marilyn Satin Kushner, Curator and Head, Department of Prints, Photographs and Architectural Collections. “I wanted to create a space where people could come to quietly remember those days in 2001 and honor the memories of the people who were lost in the attacks. The solemnity of this occasion calls for a mood of respect and introspection,” stated Dr. Kushner.

When the renovated and transformed New-York Historical Society opens fully to the public on November 11, 2011, Remembering 9/11 will be joined by a permanent installation of photographs from “here is new york” in the Robert H. and Clarice Smith New York Gallery of American History. Approximately 1,500 photographs by 790 contributors will be on display, along with a large fragment of a fire truck destroyed during the 9/11 attack.

Since the inception of the Historical Society’s History Responds, more than 150,000 visitors have taken part in its interpretive programs. Today, the History Responds collection includes numerous artifacts associated with September 11, ranging from architectural relics of the Twin Towers to artworks inspired by the catastrophe.

Remembering 9/11 is supported by Bernard and Irene Schwartz. 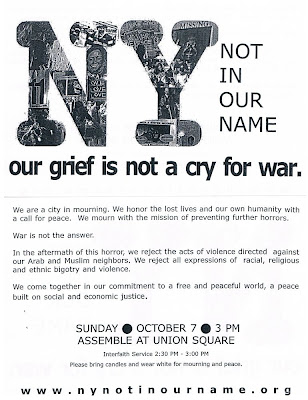 Beginning on September 11, 2001, Michael Ragsdale started collecting items focusing on the aftermath of 9/11, including materials relating to the security, recovery, war, health, peace, civil liberties, Iraq, war costs, war dead, remembrance, prisoner abuse and more. His project ended in September 2008, but this documentary paper history of what happened in New York City after the attacks of 9/11 now includes over 400 images.

Ragsdale says he has been receiving high praise from historians, authors, professors, filmmakers, activists, librarians, museum curators, and others. You can find the collection online here.

Ragsdale hopes to raise money to take the collection on the road, especially next year during the 10th anniversary of 9/11 and the opening of the National September 11 Memorial Museum in New York City.

Photo: Flyer announcing a peace rally after 9/11 from Ragsdale’s collection.