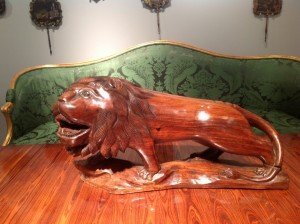 Made of glass, paint, leather, rosewood, bronze, silver and precious jewels these fanciful creatures are testimony to the enduring pleasures of the animal kingdom as a theme in art and design. And since the ASPCA is the sponsor and even beneficiary of a portion of some sales at this year’s event, tracking the artistic fauna forges a trail through the riches of an extravagant spring ritual. 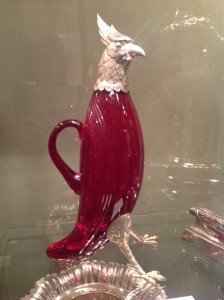 Clinton Howell, chair of the Art and Antique Dealers League of America said, “This is the third year that the ASPCA has worked with us on this event. They are a marvelous organization which even brought dogs to liven up opening night.” Small signs sprinkled throughout the booths at the Park Avenue Armory show, from May 1 to May 5, 2013, noted that the sale of certain items would benefit the ASPCA. Howell observed that animal motifs have inspired art across time and cultures, and he pointed to the claw and ball feet of some chairs he had on display as evidence of this perennial theme.

At a moment when animal rights advocates are trying to ban the last carriage horses from Central Park, on humane grounds, it’s fascinating to see John Marin include two huge dray horses hauling freight in his watercolor “Downtown New York.” 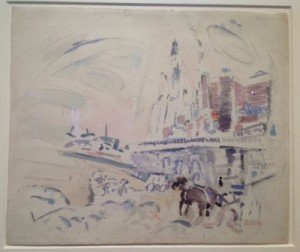 This 1912 work on view at Bernard Goldberg pictures a modernist city with the muscled equines in foreground pawing pastel clouds over the piers towards a soaring cityscape of skyscrapers. Clinton Howell’s rosewood lion from India seems far too cheerful to ever have spent time behind bars – perhaps the most fitting demeanor for creatures on view in the age of animal rights movement. The day after the show closed, a mayoral forum debated animal rights, forcing the candidates to take a position on carriage horses, a reminder of the prominence of concerns about the treatment of animals, even in the big city. 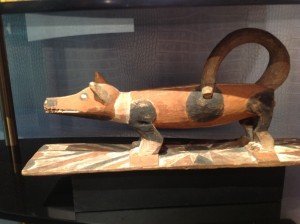 The Bernard Goldberg gallery also features a 1922 striking composition by Gaston Lachaise of bronze dolphins circling in play, a sculpture light and fleet as these delightful creatures themselves, cavorting in the spirit of the Jazz Age. You can barely discern the wave that attaches the dolphins to the base – the sculptor is wonderfully adept at suspending the figures in space. Lachaise apprenticed to Paul Manship, beloved for his gates at the Central Park Children’s Zoo, and best known for his monumental work at RockefellerCenter.

Some of these figures are a reminder of the age of exploration and travel when home decoration evoked places only the most intrepid explorer could reach, like the South Pole or Papua New Guinea. Richard Byrd’s first flight over the South Pole revealing the ragged peaks and jumbled iceberg landscapes that are the primordial home of the emperor penguin, first spread across papers in 1929, and then again in the 1940s. Mario Bucellatti’s penguin wine coolers, from Alexander’s Antiques are generously scaled, their feathers plated like medieval knights.  A marvelous, stylized spotted dog from Papua New Guinea c.1900 on view from Douglas Dawson was a hunting charm- this elongated form seems a hybrid of modernist line and crocodile ancestry.  At Nicholas Grindley, a stunning textile from Ghana before the end of the British Empire features a two-headed turtle with a British flag in the corner- the juxtaposition of the colonizer’s flag and aggressive clan motif are suggestive in light of the independence soon to come. 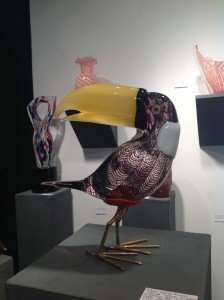 Licio Zanetti’s bold yellow and purple toucan, looking as though his beak might topple him over is one of many Murano figures from the Los Angeles Rolling Hills Gallery, which offered a sumptuous array of blown-glass from Venice. The glass makers know how to exploit the brilliant plumage of the exotic birds. On a more jocular note, Richard Lloyd Gallery features original canvases painted for the Guinness ads that feature toucans delivering pints of the dark brew with the Empire State Building as backdrop. Bird fantasy offers an endless source of inspiration, from a ruby red decanter (Estate Silver) at the Manhattan Art and Antiques Center crested in silver, to the winged dragon from Crawford silver that literally breathes fire. Even the ordinary rooster becomes a folk art standout in painted cast iron at the Gemini booth, underlining the barnyard roots of the adjective “cocky.”