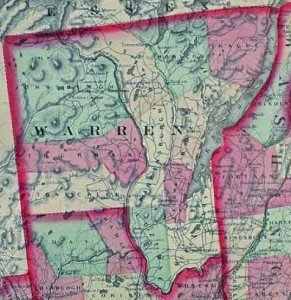 Parchments, Papers &amp- Prints:  200 Years of History from the Warren County Archives will be on display at the museum, located at 348 Glen Street, Glens Falls, NY through September 1.

Tom Lynch, who served as Warren County Records Manager from 2004 to 2012, is guest curator of the exhibit.  Of the thousands of documents stored at the Records Center he selected sixty five that represent a sampling of the types of records that the county has kept over the past 200 years and now preserves. This public program was funded by grants from Warren County, the Leo Cox Beach Philanthropic Foundation and the Waldo T. Ross &amp- Ruth S. Ross Charitable Trust Foundation.

The exhibit features such items as the 1774 Land Grant for the Robert Kennedy Patent, the 1813 naturalization application of Elizabeth Norman, the 1820 pension application of Revolutionary War veteran Philaster Pinney, and the Field Book of the Essex &amp- Warren County Line, a survey undertaken in 1844.  Also included are appointments by governors Clinton, Seward and Tompkins, an early map of Caldwell, Civil War enrollment books, jury rosters, a Firemen’s Exemption certificate from 1872, and the County Almshouse register.

There is an 1848 school report from Johnsburg and an 1863 Vital Records report for Stony Creek.  One also will find a computer display of early 20th century photographs of public works projects undertaken throughout the county. These provide glimpses of the Warren County landscape almost 100 years ago.

To complement the exhibit the Chapman Museum will present a series of programs in collaboration of the Crandall Public Library’s Center for Folklife, History &amp- Cultural Programs.  The programs will take place in the Crandall Library Community Room.

Musician Dave Ruch has dug deeply into archival recordings, diaries, old newspapers and other historical manuscripts to unearth a wealth of rarely-heard music which, alongside some of the classics from the war, offers a rounded and fascinating picture of this “second war of independence.”

Hailed as the “dean of Adirondack photographers”, Richard Dean produced thousands of pictures of resort villages, hotels, lodges, stores, restaurants, tourist attractions and people.  His grandson and Adirondack photographer, Mark Bowie, will present many of Mr. Dean’s classic images from the 1950&#8242-s and ’60&#8242-s, with personal anecdotes of the man behind the lens.

As Warren County Records Manager from 2004 to 2012, Tom Lynch organized many thousands of governmental records. In the process he gained a familiarity with the unique and fascinating stories to be found in the county’s archives. For this program he will present some of his favorites and talk about their significance to the county’s history.

The Chapman Museum, located at 348 Glen Street, Glens Falls, is open to the public Tuesday to Saturday, 10 am to 4 pm- and Sunday, noon to 4 pm.  For more information call (518) 793-2826 or go to www.chapmanmuseum.org.  To learn about other Warren County Bicentennial activities go to http://warrenny200.org/.