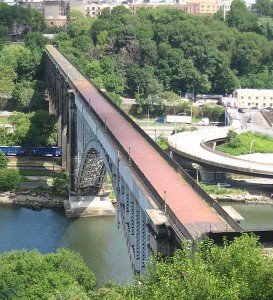 The Croton Aqueduct still functions in Westchester not as a water-carrying system but as an elongated trail somewhat paralleling the Hudson River from Croton to Yonkers. The Aqueduct has devoted followers and a friends group and always is being used by hikers, strollers, runners, and families. It forms a living thread uniting the communities of the county.

By contrast the High Bridge has been abandoned for decades. It continued to carry water until 1958 and the walkway remained open until the 1970s. At that point the link between the two communities, the Highbridge community in the Bronx (the community is one word, the bridge is two) and Washington Heights in Manhattan was severed when the bridge was closed. This is a far cry from its glory days when an amusement park and hotels functioned in the area according to Bronx historian Lloyd Ultan in a radio interview. Now thanks to a $62 million restoration project, it once again will be possible for the two communities to walk to visit each other. The Manhattan side is a park with a water tower and a pool- the Bronx side is a neighborhood.

Chauncey Young, a community activist in Highbridge, and filmaker Jose Gonzalez have created a video which has been posted to YouTube about the bridge. The video tells of an elementary school project devoted to the history of the Highbridge community. Participants included the Friends of the Croton Aqueduct from Westchester who talked about aqueducts- a retired scientist from the American Museum of Natural History who led a field trip on the geology of the area- the Harlem River Ecology Center &#8211 Urban Divers which stressed the ecology of the area- and the Bronx Historical Society which focused on the history. The students then interviewed community residents, one was 100 years old, about the history of community including when the bridge was operational.

Young and Gonzalez also created a youth program which has included a canoe trip on the Harlem River just like as if they were upstate New Yorkers out on their lake or river. The goal of these efforts is to connect the community with its history even though few current residents date their residence back to the 19th century and frequently not even to the 1970s when the bridge still functioned. Gonzalez was quoted as saying about the new opportunity: “Open that bridge, teach them the history and give them pride in their neighborhood.” The community has rallied behind a bridge that gave the community its name despite not having ancestors there when the bridge was build.

This event reminded me that there are a number of bridges over troubled waters which could be joined together in a path if one were so inclined. The most well-known recent reopening of a bridge is the Walkway which was an abandoned railroad bridge in Poughkeepsie. Ever since it reopened it has been flocked with people of all ages and dogs. I recently happened to be at the New Croton Dam bridge, another bridge which can be walked.

There are people who make it their mission in life to climb every high peak in the Adirondacks called the Adirondack Forty-Sixers, and when they fulfill that quest they are celebrated. Let’s create a similar quest more accessible to families for the high bridges of the state with a “Bridge over Troubled Waters” passport that can be stamped each time one of the bridges is crossed. There are so many paths that can be created which can connect people to their community, it’s hard to know even where to start.