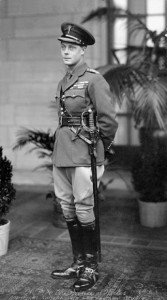 On November 10, Edward, Prince of Wales, arrived at the train station. Awaiting him were Secretary of State Lansing, Major General John Biddle of the US Army, Rear Admiral Albert T. Niblick of the US Navy, and Major General Charleston of the British army.

The band of Plattsburgh’s 63rd US Infantry was on hand to play the British and American national anthems. A group of young ladies held an unusual canopy (the flags of both countries sewn together) while Prince Edward strolled beneath it, shaking the hand of each girl.

Augmented by a contingent of several hundred from Plattsburgh, the throng, estimated at around 2,000, offered a gracious welcome to the future king, whose friendly, pleasant demeanor endeared him to the crowd.

(Years later, Edward made his lasting mark on royal history. After ruling as king for less than a year, he famously chose to abdicate the throne in order to marry a commoner, Wallis Simpson.)

Another royal visit to Rouses Point twenty years later lacked the details of Edward’s sojourn, though it was considered a great honor for the private rail car of King George VI and Queen Elizabeth to pass through any village. In 1939, Rouses Point was featured in articles from coast to coast as the place where “the first reigning monarchs ever to visit the United States and Canada” departed from American soil.

Security for the trip was at the highest level ever seen in the North Country. D&amp-H Railroad Police, FBI agents, NYS Police Troop B officers, and the entire 26th Infantry from Plattsburgh handled an important assignment: “… practically every station, crossing, culvert, underpass, and overpass will be patrolled for hours before the royal train passes through this section.”

Separately, a massive crew was charged with ensuring against any equipment failures: “… every inch of the roadbed from Troy to the Canadian boundary at Rouses Point will be patrolled by section men and other railroad employees just ahead of the train to make certain there are no broken rails or obstructions on the track.” 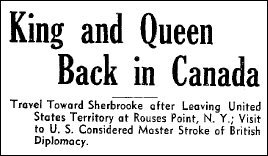 The royal tour of Canada received worldwide media coverage, but the US excursion, described as “a private diplomatic mission” related to impending hostilities in Europe, was more low-key. Small crowds gathered at northern New York rail stations to watch the royal train pass by on the trip’s farewell leg.

Traveling north along Lake Champlain’s shores, the train bearing the King and Queen reached the Rouses Point station at 5 a.m. on Monday, June 12, their last stop in America. A number of Canadian Mounties, having stayed overnight at Rouses Point’s Holland Hotel, assumed security duties at the border crossing. Within about fifteen minutes, the royal couple was on their way to Halifax, where they would sail back to England.

Interesting visitors are just a small part of the village’s story, which spans many and diverse subjects: the discovery of the lake by Samuel de Champlain- various conflicts, including the Revolutionary War, the War of 1812, the Lower Canada Rebellion, and the Fenian struggle during the Civil War- the stories of Fort Blunder and Fort Montgomery- a lengthy border dispute with England- smuggling of just about every commodity imaginable- the wild times of rum-running during Prohibition- and more.

Rouses Point is one of New York State’s historical treasures.

3 thoughts on “The Prince of Wales at Rouses Point”