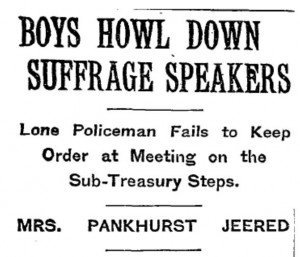 Gotham will host a Super Bowl, putting the city in the same big boys league as Dallas and Miami. As Mayor Michael Bloomberg recently announced, the grand spectacle is coming off after many years of planning by knowledgeable gentlemen with their eyes on hoopla and tourist dollars.

Let’s not stop there. Ahead lies another celebration the metropolis – and the rest of our state &#8211can start lacing up their sneakers and getting out their checkbooks for:

In November, 1917, the women of New York State won the right to vote. New York City was the epicenter of that victory, which changed the national political picture for everyone. Are we ready to celebrate the centennial of that political Super Bowl?

Football mimics war. On the offense, you win by gaining ground in the face of defensive opponents who push back hard. The long battle for woman suffrage started in Seneca Falls NY in 1848 and was met, year after year, by push-backs that make a Super Bowl football offensive line look like laundry hanging out to dry. Legislators turned deaf ears, vituperative tongues spewed slander and calumny along Fifth Avenue while thousands marched and half a million looked on. The most powerful people, institutions and periodicals in the city stood fast in opposition.

In war and in football, people get hurt. So too did women who fought for the vote &#8211 and not only by slings and arrows of nasty language. Making speeches outdoors on Wall Street meant withstanding buckets of cold water or bags full of of glass shards hurled at your head. 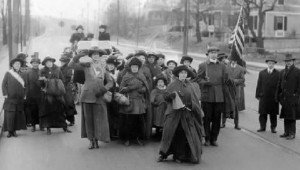 What is required to win? As every football fan knows, brute physical strength and stamina. So imagine organizing troops of women to march in the dead of winter from the city to the capital in Albany or trudging up and down the stairs of every tenement on the lower East Side gathering recruits. And courage, too: braving parts of the city known for opium dens and white slave traders to slip pamphlets under triple-locked doors.

More than strength, winners have strategy. By the early 20th century, the old tactics of gathering petitions and holding indoor meetings were replaced by a new team’s plan for more confrontation, more pageantry, more public relations and a reach for more money. In New York City particularly, the new suffrage team recruited more widely, bringing onto the field large numbers of workers, immigrants, blacks and Jews.

If you fumble in football, the opposition can grab the ball and run. By 1915, maybe 30 yards from the goal, the suffragists lost a state referendum, but the game wasn’t over. At the end of November, 1917, as Paul Robeson, All-American football player for Rutgers University, was taking the field, the citizens of New York again took themselves to polling places. This time, our team recovered. Overnight, the scoreboard changed: with its huge female population, New York doubled the number of American women who could vote. The momentum continued until touchdown in 1920, when the 19th amendment sealed the victory for the entire country.

So hooray, New York! It took a lot to get Super Bowl 2014. Now let’s plan another extravaganza for 2017, the Centennial celebration of a Super Bowl that expanded democracy and brought many thousands cheering into the streets.

As girls on the sidelines used to chant, shaking their pom poms: “First and ten, do it again!”

7 thoughts on “Louise Bernikow: Of Super Bowls And Suffragettes”