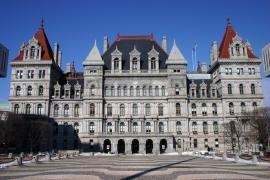 The recent posts on the role of the municipal historians and the Path through History project have touched a nerve, several actually, as reflected in the emails I have received. Great!

There are serious issues which need to be addressed and few if any forums for discussion. It is astonishing how many people in the history community are not aware of the Path through History project or who have already given up on it on being anything credible &#8211 “an elegant show,” “the fix is in,” “I never heard of it.” In this post, I would like to share some things which are being done and suggest some things which should be done.

1. The Western New York Association of Historical Agencies (WNYAHA) among other regional history organizations holds an annual conference. Shouldn’t every one of the ten regions of the Path through History have similar organizations and meetings? Wouldn’t the $1,000,000 already allocated for the Path through History project be better spent by hiring people to facilitate such regional meetings?

2. The New York Cultural Tourism Network (NYCTN), which is primarily a central New York organization, meets periodically, most recently February 6 in Syracuse, to promote cultural tourism in New York. Shouldn’t every one of the ten regions of the Path through History have similar organizations and meetings? Shouldn’t they also work with the history organizations in their community? Wouldn’t the $1,000,000 already allocated for the Path through History project be better spent by hiring people to facilitate such regional meetings?

A. At its December, 2012 meeting NYCTN reported:

It was agreed that increasing the communication and improving it through a Constant Contact type software should happen to increase visibility and assist in the membership campaign.  Karen Howe suggested Vertical Response as another newsletter software that the Barnes Foundation uses, it is similar to CC and it is free.  (www.verticalresponse.com) Barb Bartlett brought up the possibility of a list serve so that each member could share information without having to have Spike distribute it.  There was agreement that however it is done, the members need to be informed of what the other is doing.

Isn’t this true in every region? Isn’t the lack of communication a statewide issue? Should every region and organization have to reinvent the wheel? Wouldn’t the $1,000,000 already allocated for the Path through History project be better spent by hiring people to facilitate such regional meetings?

3. The Connecticut League of Historical Organizations (CHLO) is holding regional meetings in the state called “CLHO On the Road.”

Join friends, historical neighbors, and colleagues from your local region to network and learn. Each meeting will feature a chance to get to know your heritage colleagues, a formal presentation on a topic of interest chosen by you at our last regional meetings, a chance to share news and updates, ask advice, and share ideas with your colleagues, refreshments, and a tour or visit to the host institution.

Networking is just a fancy term for the reality that people are social beings who need to meet with other people. In effect given the size differential, these are the equivalent of county meetings sponsored by the state organization. By contrast the Mid-Hudson regional Path through History Project hasn’t even met in all seven counties in its jurisdiction and a similar situation is probably true in the other regions. Many people are unable to attend regional meetings because the distance is too great. Shouldn’t our regional organizations whether independent entities or part of a state organization also meet at the county level? Wouldn’t the $1,000,000 already allocated for the Path through History project be better spent by hiring people to facilitate such regional meetings?

4. Last February, I received an email invitation from Prof. David Hochfelder, Associate Director, Public History Program, Department of History, SUNY Albany, to participate in a workshop following the annual Researching New York conference in November. He is a reader of my posts and initiated this workshop to bring SUNY faculty from around the state in contact with public historians working in various locations and settings. I was unable to participate since I am away at another conference at that time of year.

Much of the cost for the program was due to travel expense, another reason it’s important to conduct such workshops at the regional and county level so resources within the community can be utilized and travel expenses reduced. Wouldn’t the $1,000,000 already allocated for the Path through History project be better spent by hiring people to facilitate such meetings?

5. On one hand, New York wishes to promote its historical sites but on the other hand field trips have been eliminated or minimized. There is no place on statewide tests for local history or way to apply the skills learned in local history to state, national, and world history. The new common core curriculum may be ready for review in April, 2013. By coincidence, here is what a retired Columbia County teacher wrote on a listserve.

The idea of having them research a local issue and tie it to the larger history of the nation is great. I have found plenty of stories about Copake that reflect national issues.

As you noted, the project lends itself to students doing archival research. They can also learn interviewing skills etc. I’ve scanned many local residents old photos into my laptop and then put them onto my Facebook page (and into a PowerPoint presentation)

I understand your concern that it’s an American history survey course, so you might identify some major topics for students to pursue:

1. how their towns functioned during World War II for example
2. How immigration has affected the town
3. Where the founding fathers came from and how they went about establishing government
4. The town’s economic history: in Copake, the town was badly affected by the rerouting of a major road so that it now bypasses the town
5. The social structure of the town
6. How the dominant groups in the town have interacted with minorities

Wouldn’t the $1,000,000 already allocated for the Path through History project be better spent by hiring people to facilitate such communication with the NYSED on the social studies curriculum, the importance of filed trips, and civics?

In Connecticut, social studies teachers are gearing up to have their voices heard in the state capitol. They plan to create a new Legislative Liaison position and issued the following proclamation.

For far too long we have simply complained to each other about the inaction at the state level on the Draft Social Studies Frameworks and the lack of a Social Studies Consultant in the State Department of Education. Recently, members of Social Studies and History organizations around the state met to find ways to change that, AND WE NEED YOUR HELP!

We need to work together to make our voices heard at the state level. We know how important Social Studies education is in the lives of our students and for the benefit of our state. Some of our students will be scientists, and some will be engineers, but ALL OF THEM WILL BE CITIZENS.

For far too long we have stood on the sidelines while others decide the future of our discipline, often relegating it to ten minutes at the end of the week. No longer. For more information, AND TO MAKE YOUR VOICE HEARD,

An amendment to include a position of “L
egislative Liaison” to the list of Executive Board officers. Create a new Article Six, Section 6 to read:

Wouldn’t it be nice to have some do something similar on behalf of the New York History community, John McEneny for instance. Wouldn’t the $1,000,000 already allocated for the Path through History project be better spent by hiring people to facilitate such efforts in Albany?

What are the forums for addressing these issues in the New York State history community &#8211 (i) the role of local and state history in education, (ii) the creation of paths through history that reach out to the local residents who don’t even know their own community’s history, (iii) the creation of an effective history infrastructure at the county, regional, and state level connecting municipal historians, historical societies, teachers, professors, historians, and tourism, (iv) speaking up in Albany? Will these issues be addressed at the annual statewide conferences of Museumwise, APHNYS, NYSHA, NYSCSS? The history community needs to do a better job of addressing these issues and producing results.

We remember together or we die alone.

9 thoughts on “Doing Better Than A Path Through History”