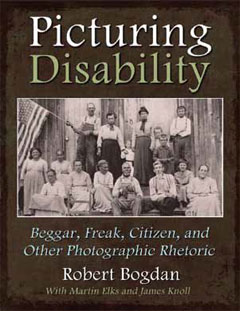 Midget, feeble-minded, crippled, lame, and insane: these terms and the historical photographs that accompany them may seem shocking to present-day audiences. A young woman with no arms wears a sequined tutu and smiles for the camera as she smokes a cigarette with her toes- a man holds up two prosthetic legs while his own legs are bared to the knees to show his missing feet.

The photos were used as promotional material for circus sideshows, charity drives, and art galleries. They were found on begging cards and in family albums. In Picturing Disability: Beggar, Freak, Citizen, and Other Photographic Rhetoric, Bogdan and his collaborators gather over 200 historical photographs showing how people with disabilities have been presented and exploring the contexts in which they were photographed.

Rather than focus on the subjects, Bogdan turns his gaze on the people behind the camera. He examines the historic and cultural environment of the photographs to decipher the relationship between the images and the perspectives of the picture makers. In analyzing the visual rhetoric of these photographs, Bogdan identifies the wide variety of genres, from sideshow souvenirs to clinical photographs. Ranging from the 1860s, when photographs first became readily available, to the 1970s, when the disability rights movement became a force for significant change, Bogdan chronicles the evolution of disability image creation.

Picturing Disability takes the reader beyond judging images as positive or slanderous to reveal how particular contexts generate specific emotions and lasting depictions.

Robert Bogdan is Distinguished Professor Emeritus of Social Science and Education at Syracuse University. He is the author of several books including Freak Show: Presenting Human Oddities for Amusement and Profit and Beauty and the Beast: Human-Animal Relations as Revealed in Real Photo Postcards, 1905–1935.