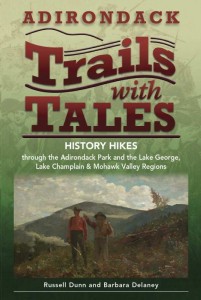 Adirondack Trails with Tales: History Hikes through the Adirondack Park and the Lake George, Lake Champlain &amp- Mohawk Valley Regions (Blackdome Press, 2009) is by Albany writers Barbara Delaney and Russell Dunn, licensed guides and authors of books on the great outdoors of eastern New York and western New England. This guide is an effort to connect hikers with the history around them. The guide includes detailed directions, maps, photographs, and vintage postcards.

Together with Barbara Delaney (also a NYS-licensed guide), Dunn leads hikes and paddles in the Adirondacks, Catskills, and Hudson Valley, as well as to other sites of exceptional beauty and historical uniqueness. Dunn and Delaney give frequent lecture &amp- slideshow presentations to regional historical societies, libraries, museums, civic groups, organizations, and hiking clubs on a wide variety of subjects, ranging from waterfalls to natural areas of historic interest.