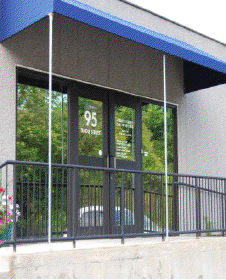 The City of Albany’s earliest efforts at records preservation began even earlier. Federal Comprehensive Employment and Training Act (“CETA”) funding was used by the City’s Human Resources Department under Commissioner John J. McEneny to create a City Records Library in 1971. City Historian Norman Rice worked with newly-hired Robert Arnold to survey older records held by various City departments and relocate them, first to the top floor of City Hall (sadly, itself the site of a fire in 1976) and then to 27 Western Avenue, the former Albany High School annex. Federal CETA funding to the City dried up in the early 1980’s, just as the County’s records management program started. The leadership of both governments chose to work on a joint solution.

Resolution 269 approved October 15, 1982, by the Albany County Legislature established ACHOR under the County Clerk to manage all County records. The City of Albany adopted legislation that same year to complete this co-operative effort. Albany City ordinance number 67.82.88 established the City Records office as part of the joint County and City records management. The City of Albany provided the newly-created ACHOR with its first home in the High School annex from 1982 to 1986. ACHOR first appears as a separate unit in the 1983 Albany County budget, funded at $236,155, and rising to just under $500,000 for 1986 as ACHOR occupied its second home at 250 South Pearl Street. 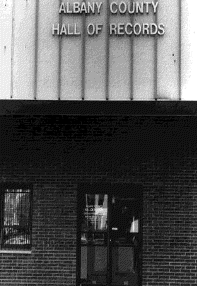 Resolution 272 of 1984 authorized a lease to convert 12,754 square feet of former supermarket space to two floors of office space and a high-ceiling records storage area. Res. 274 of 1985 authorized architectural services, and $212,306 in construction contracts were authorized by Res. 11 of 1986. Included was a small vault room with a Halon fire extinguishing system (authorized by Res. 199 of 1986), and a modest public research room, plus a microfilm processing laboratory and a loading dock. The building was capable of holding approximately 32,000 cubic feet of records. The renovated space opened its doors in October 1986. Some twenty tons of County Clerk records were moved from the Court House to the new facility during 1986.

Increasing demand for access to records led to a doubling of the public research area at ACHOR, which took over the area that had once held the clerical staff. Many part-time older workers at ACHOR gradually retired, and ACHOR acquired its first records delivery van. Computers became more and more central to our operations.

The program’s success in storing inactive records required additional storage space by the early 1990’s. In June 1993, the County Legislature approved a five year lease on a second records warehouse at 105 Bradford Street in Albany, which building employed a “catwalk” system enabling access to two levels of records without the need for ladders. This secondary storage bought time to plan a longer-term solution.

By 1998, it was clear that ACHOR’s existing facilities on South Pearl Street and Bradford Street would not suffice much longer, and planning began for a larger facility that would consolidate the records of City and County government under one roof once again. After consideration of several prospective sites, the former Huck Finn’s Warehouse location on upper Tivoli Street was selected, and a lease for a new 39,080 square-foot building here was approved on December 20, 1999.

ACHOR’s new home, its third, was the first built from the ground up as a records storage facility. All of the existing buildings on the site were demolished, with the exception of a 1990 warehouse at the property’s northernmost edge. A new concrete slab was formed, atop which the new building was constructed and joined to the existing warehouse section. Plans included a public search room more than doubled from South Pearl Street, a larger area for archival work, and a total records storage capacity of 104,000 cubic feet. Vault space was more than tripled, with a new FM200 gas fire suppression system as well as humidity controls. 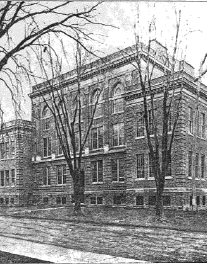 Electric lifts would replace ladders as the means to retrieve boxes stored as high as 21 feet up, on new industrial shelving, and the entire facility would be served by a sprinkler system. Records and equipment from South Pearl Street and Bradford Street began to move in early January 2001, with staff and office furniture arriving over the long, snowy weekend of January 12 to 15. We opened our doors here to the public on Tuesday, January 16 and staged our official microfilm-ribbon-cutting three weeks later on February 6, 2001. In the Spring of 2003, the County exercised its option to purchase this building, and has owned it since August 1 of that year.

From the late 1980’s to 2012, ACHOR has applied for and received over $655,000 in grants from a variety of sources, primarily the Local Government Records Management Improvement Fund. ACHOR also assisted in several other records management grants to the City of Albany during these years, and became a model for local government records centers in our state.

Today, we have more than 90,000 cubic feet of records in storage here – about 86% of our capacity. Moving inactive records out of office space and into this facility has saved the County and City millions of dollars, as well as ensuring that these records are better managed. For example, we annually destroy (through shredding and recycling) several thousand cubic feet of records that have reached their legal retention deadline.

People wonder how we can find specific files in those 90,000 cubic feet of records, and the answer is that since 1989 we have an excellent computer system to help us manage that task. Whenev
er a box of records is transferred here, the sender also submits a description of what’s in that box. That way, when the department owning the records needs a file back, they use this computer system to find the specific record, and then submit their request electronically. The request prints out here, and then the record is retrieved and delivered to the requester. And then, of course, we replace that record back again when it returns to us.

Albany County Information Services created this software system and keeps it updated, for which we are very grateful. It’s that same software that also tells us when each box reaches its destruction date. Info Services also maintains the ACHOR web site, enabling our customers to “visit” us at all hours. An ongoing effort to improve our records descriptions in standard MARC format has enabled us to make our holdings more visible to researchers everywhere.

A major part of our work here is micro-imaging. This includes both traditional microfilming as well as digital imaging. Our equipment can image anything from a tiny microfilm frame about the size of a fingernail to maps four feet wide and many feet long. We also perform conservation work on older records, and we prepare records descriptions so that the public can learn more about our holdings here.

In our public search room, two staff work full-time to assist researchers in finding information within our records- in 2011, we had about 1200 such visitors. Among the tools we offer here are a complete set of City Directories from 1830 to the present, as well as census books, building records, and water rents.

We reach out to school groups through our Hands on History program, and are adding more records online every year. All of this takes a lot of work by the 17 County and 2 City employees stationed here under the leadership of Patricia Bryce and Craig Carlson. Our annual budget has grown to about $1.2 million now, with about $200,000 in annual revenue. This dedicated staff performs all manner of functions, from cleaning and deliveries, to microfilming and imaging, to preservation work and ordering supplies, to working with agencies on how to better manage their records, to recovering damaged records, and to supervising volunteers. We manage records, manage grants, and manage people. Every work day, we help county and city workers, and
the public, find the records that they need.

So while we commemorate these first thirty years of the Albany County Hall of Records, we also congratulate the men and women who have worked here, now and in years past, for making our program a success. A fair number of us have gone on to careers in records management elsewhere, but many have remained here. I am grateful to every one of them for their service and dedication.

We have also had the constant support and commitment of the governments of the County and City, and we thank the County Executives, Mayors, County Legislators and Aldermen who have made this program possible. We would not be here without them.