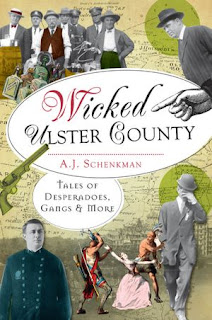 Americans are captivated with outlaws. Our history is filled with those colorful characters who bent the law to fit their own ends, from Jesse James to Al Capone.

Newspapers fed this fascination by following every move of many of these individuals. They were given curious names such as “The Kid,” “Gyp the Blood,” or in the case of Capone, “Scarface.” Many people do not know that a small hamlet in Ulster County had its own outlaw, known as “Big Bad” Bill Monroe. He was also identified as the “Gardiner Desperado.”

Before the summer of 1908, William (Bill) Monroe was well known locally for his explosive temper when he consumed alcohol. Monroe stood at 5’6” and 155 pounds. In his mid-twenties, he was described as having light hair, a stout build, a fair complexion, a tattoo of a star on his wrist, and a small mole on his left cheek.

During the summer of 1908, Monroe walked onto the Deyo farm at the corner of Route 44/55 and Route 208 in Ireland Corners looking for work. He had worked for Abram Deyo before, and even recognized his brother Jonathan (who was a prominent lawyer). Because of his explosive temper, Monroe was not given a job this time.

Later that day, Monroe returned to the Deyo home, which today is Ulster Savings Bank, in an inebriated state. While there, Monroe had assaulted both Deyo families, including children and wives, and all of the farm hands he could find. He completed his attack by burning the Deyo barn down to the ground. He then absconded to his home in Jenkinstown, where he sometimes lived with his wife Katie Davis. Monroe knew that once the wires were repaired that he had cut at the Deyo homestead, word about his horrific acts would be transmitted to the local constables. He had no choice but to flee. As headlights of law enforcement vehicles came to a stop by her house, officers emerged and asked Davis where Monroe had gone- Davis sat on her porch and honestly confessed that she had no idea where he had escaped. Thus, the legend of Big Bad Bill was born.

During the entire summer of 1908, newspaper headlines boasted the whereabouts of Monroe, who was increasingly becoming known as Gardiner’s Desperado. He spent the better part of that summer taunting not only local law enforcement officials, but sheriffs such as Ulster County Sheriff Boice and Orange County Sheriff Decker.

Monroe’s antics included attempting to fake his own death, offering a reward for his own capture, and even inviting law enforcement to meet him at the Orange County Fair. When the officers arrived at the fair, an “old widow” asked one of them for directions. The next day, officials decreed that Monroe was a fraud, as he answered to charges of him being the old widow who had requested directions at the fair. The public laughed along with Monroe as newspapers reported his sightings all over the US.

This seemed to end in 1908, when officers, who were following leads, cornered Monroe in the home of a relative in New Jersey. They ordered Monroe to come out with his hands held high. In response, the Gardiner Desperado smashed through a back door, with an officer in hot pursuit. Deputy Sheriff William Leonard caught up with Monroe in an adjacent corn field and alerted others that he was emerging with Big Bad Bill.

As they made their way out of the field, the outlaw swung around and knocked the officer’s gun away, but the officer was still able to squeeze off several shots- Monroe fell to the ground. He then raised himself up and disappeared into a swamp. He was not further pursued by any officers due to the sheer amount of blood they found. However, Monroe was not dead- much to the delight of his public audience, he was back to carrying out his exploits. For example, he wrote a letter to his wife as another person, claiming that Bill Monroe, her husband, had died of wounds. After this previous letter was made public, Monroe wrote another letter in which he asked how he could give himself up to authorities – paradoxically, he was supposed to be dead.

After officers trailed Monroe through Orange, Sullivan, and Ulster Counties, even going as far as New Jersey, in November 1909 word came from a sheriff in California that his crew had seen Monroe’s “wanted” poster and quite possibly had him in their charge. He was arrested for a petty theft. Sheriffs Decker and Boice headed out west to take custody of Monroe, who was interestingly elated to see both men. Per Ulster County newspapers of the day, Monroe was upset that he had been housed with so many hardened criminals- he obviously did not consider himself as such. He also commented that Boice’s jail in Kingston was kept nicer.

The Gardiner outlaw had one request – he wanted the sheriffs to stick around for a bit so that they could all return to Ulster County in the spring. He explained that he was not fond of the cold, but loved Ulster County in the springtime. They did not permit this and thus the three men boarded a train heading east. Once they were close to Kingston, Monroe had yet another request of his captors &#8211 he wished to clean himself up for the reporters and other gawkers who would surely come to see him.

The public continued to follow Monroe in the newspapers. Just about everything he did was fodder for the news. For example, when he was allowed to go to the dentist for a toothache, it was reported in the papers. Eventually, though, Big Bad Bill went to trial and subsequently was sent to Dannemora where he was sentenced to four years and eight months for assault.